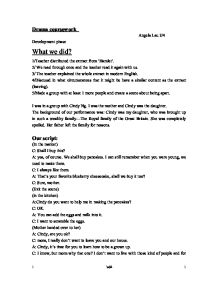 Drama coursework Angela Lau U4 Development phase What we did? 1/Teacher distributed the extract from 'Hamlet'. 2/ We read through once and the teacher read it again with us. 3/ The teacher explained the whole extract in modern English. 4/Discussd in what circumstances that it might be have a similar content as the extract (leaving). 5/Made a group with at least 1 more people and create a scene about being apart. I was in a group with Cindy Ng. I was the mother and Cindy was the daughter. The background of our performance was: Cindy was my daughter, who was brought up in such a wealthy family---The Royal family of the Great Britain. She was completely spoiled. Her father left the family for reasons. Our script: (In the market) C: Shall I buy this? A: yea, of course. We shall buy pancakes. I can still remember when you were young, we used to make them. C: I always like them. A: That's your favorite blueberry cheesecake, shall we buy it too? C: Sure, mother. (Exit the scene) (in the kitchen) A:Cindy do you want to help me in making the pancakes? C: OK. A: You can add the eggs and milk into it. C: I want to scramble the eggs. (Mother handed over to her) A: Cindy, are you ok? C: mom, I really don't want to leave you and our house. A: Cindy, it's time for you to learn how to be a grown up. C: I know, but mom why that one? I don't want to live with those kind of people and for god's sake, how can you live with no servants at all? This is ridiculous! A: Cindy, how many times do I have to tell you. Of course. There is nothing wrong to be wealthy, but there is nothing wrong to be not wealthy too! C: But mom..... ...read more.

After discussing it, we were then divided into groups of three. I was in a group with Cindy N and Sam C. We were told to do freeze frames---no more than 4 frames. We chose 3 most important lines to focus on. 'Wednesday morning at five o'clock as the day begins.', The first scene was she wanted to check and make sure that her parents were sleeping. She closed their door and walked away. Second scene was 'Pick up the letter that's lying there.' And the last one was 'meeting a man from the motor trade.' Section 2: We carried on what we did in the previous section. We were divided into groups of 4. I was in a group with Tom D, Daisy D & Sam C. Our scene was I (the daughter) left the letter. Parents work up, read the letter and worried about my safety. I met the guy from the motor trade. I tried to buy a brand new Mercedes car. I nearly got raped. We had tried to practice before hand. We watched other group's performance. Evaluation :My group Our scenes focused on a number of lines, "father snores as his wife gets into her gets into her dressing gown, picks up the letter that's lying there.' 'Meeting a man from the motor trade.' In the first part of the scene, Father(Tom D) and Mother(Daisy D) were snoring. According to the lyrics Mother woke up first when Father was still snoring, he slept heavily. She dressed in her gown---showed her unconsciousness. After reading it, she woke Father up. Father showed his unawareness too. Next, came to the scene that I had performed. I walked in a car shop--- ('keep the appointment she made.') \POSHLY. It showed that I was a spoiled kid. I got so much money and wanted to buy a brand new expensive Mercedes. I did not even care that the car was actually 'the-sales-person-owned'. ...read more.

2. Used simple device, such as paper to show the hatred. 3. When the time that Cindy felt regretted, I freeze. Therefore, Cindy could talk to herself. This made it very impressive. 4. Realistic. No matter how bad the impression is, the truth may not always be the same. 5. Educational, wealthy people do not have to be rich people. 6. Volume, words and sound are clear enough to be heard. If I could have another chance for doing it, I will: 1. Ankle is not where the knee is. I should not hold my knee and claimed that I hurt my ankle. 2. Improved my fluentness in English language. 3. Speak more clearly. 4. Use exaggerate movements to make all the small bits easier to understand. There is another group I want to evaluate. Tom D, Daisy and Christian. Their scenes are based on the theme---homosexuality. I thought they are quite good, because: 1. Clear introduction of character. 2. Managed to get the father (Christian) audience confused and then solved it eventually. 3. Did little actions, for example: chatted within the son, the so-called 'girlfriend' and the 'so-called girlfriend's girlfriend' groups. 4. The truth is clear to audience. In order to make it a more successful play, I would: 1. Do not cut in the middle of the play by using not very good excuse. 2. Do not mess around too much, because the audience may get fed up with it. 3. Make the kitchen more obvious. 4. End it in a better time. (For example: After the father found out the truth). In general, I think everyone in our group tries hard and determined to make their works successful. Time is a very important element to determine the success. Sometimes, if we emphasize too much in a particular part, the other part we got weaker. We have all learnt how to seize the time wisely. It is very delightful that we all managed to use our face to face the audience. Despite what we have learnt, we can do better in the future. ?? ?? ?? ?? 1 1 `ed4 ...read more.