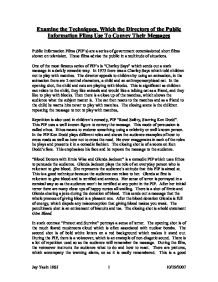 Examine the Techniques, Which the Directors of the Public Information Films Use To Convey Their Messages

Examine the Techniques, Which the Directors of the Public Information Films Use To Convey Their Messages Public Information Films (PIF's) are a series of government commissioned short films shown on television. These films advise the public in a multitude of situations. One of the most famous series of PIF's is "Charley Says" which sends out a stark message in a darkly comedic way. In 1973 there was a Charley Says which told children not to play with matches. The director appeals to children by using an animation, in the animation there are 2 central characters, a child and an anthropomorphised cat. In the opening shot, the child and cats are playing with blocks. This is significant as children can relate to the child, they like animals and would like a talking cat as a friend, and they like to play with blocks. Then there is a close up of the matches, which shows the audience what the subject matter is. ...read more.

There is a shot of Ernie and Glenda sharing a joke during the donation of blood. This sends out a message that the whole process of giving blood is a pleasant one. After the blood donation Glenda is full of energy, which dispels any misconception that giving blood makes you weak. The penultimate shot is an enticement of biscuits and tea. The closing shot is a bold statement Give Blood. In stark contrast "Protect and Survive" portrays a sense of terror. The opening shot is of the much feared mushroom cloud which is often associated with nuclear bombs. The second shot is of bold white letters on a red background which makes it stand out. During the PIF, there is a voiceover, which is an example of non-diagetic sound. There is a lot of repetition used so as the audience will remember the message. During the film, the voiceover instructs the audience what to do and how to react. ...read more.

It makes you not want to think about the consequences and makes you feel sad for the dog, it seems that he will be killed but you could have done something to prevent it from being killed. A seriously presented PIF aimed at children is "Don't Talk to Strangers". The director uses animation which appeals to children. The child is the main character which keeps the interest of the young children audience. The film shows by example. It has a zoom on the child's face when he refuses to go with the stranger despite him offering the child an enticement. This is good technique as it emphasises the fact that the child refused the strangers advances. The PIF uses a friendly mother like voiceover. Though strict it is comforting and kind to children and is therefore more likely to be remembered and children are much more likely to listen to the advice. To conclude directors use a various range of techniques to convey their message. They suit different techniques to the audience and the more serious they would like the film to presented. ?? ?? ?? ?? Jay Yasin 10SJ 1 10/29/2007 ...read more.