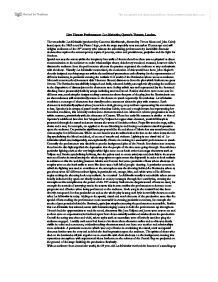 Explore and Compare the constraints of socitey in madame bovary

Live Theatre Performance: Les Mis(rables, Queen's Theatre, London. The remarkable Les Mis(rables (produced by Cameron Mackintosh, directed by Trevor Nunn and John Caird) based upon the 1862 novel by Victor Hugo, took the stage superbly now somewhat 23 years ago and still delights audiences of the 21st century who witness the stimulating performance by incredible dramatic devices that explore the contemporary topics of poverty, crime and punishment, prejudice and the fight for freedom. Spatial area saw the actors within the imaginary four walls of theatre therefore there was no physical or direct communication to the audience to make relationships closer, this theory remained constant, however didn't distract the audience from the performance whereas the passion engrossed the audience to stay enthusiastic with the show. Visually Les Mis(rables mesmerised, the motivation of this would have been John Napier's cleverly designed revolving stage set within the traditional proscenium arch allowing for the representation of different locations, in particular creating the realistic 2-D world of the Barricades where we as ...read more.

On particular significant prop would be the red sheet of fabric that was transformed into various styles for different acts. Where on one hand it was the tablecloth at the bar on the other it was the red flag symbolising the blood and shed, of an era of tumult and violence. Lighting is one visual aid of Les Mis(rables which was indisputably, atmospherically effective in making it a successful performance to watch. Generally the performance was dimly lit to put the background plot of the French Revolution into context; therefore the dim light signified the depression that the people of the time were going through. Nevertheless particular lighting such as the very bright white light came on as death arrived amongst characters such as Valjean and Fantine symbolising holiness, also the gobos used to create windows and drain lids in the sewers were as effective in transforming the whole stage space to again create that big world in order to look realistic in addition to this the wedding ...read more.

Overall the acting was clear and vivid, where styles such as naturalism were effectively used keeping the audience engaged. Lucidly each actor had learnt a lot about there character earlier and so this was clearly visible in voice and movement, evidently making characters stand out from one another and relationships more definable. A particular moment which was very effective in combining the visual, aural and spatial elements further was the very end as it left the final impression upon the audience. The spirits of those who died on the barricades all join together as an ensemble with their shadows on the background creating this mysterious atmosphere with supernatural ideas furthermore the colours of the French flag are projected on the ground of the stage finishing the production flawlessly. With an audience from around the world, the 23 year-old Les Mis(rables received the honour of a standing up crowd applauding, laughing and shedding tears, one production which proved triumphant. Words: 996 ...read more.