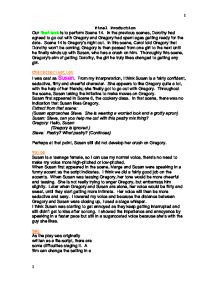 Final Production Our final task is to perform Scene 14. In the previous scenes, Dorothy had agreed to go out with Gregory and Gregory had spent ages getting ready for the date. Scene 14 is Gregory's night out. In this scene, Carol told Gregory that Dorothy won't be coming; Gregory is then passed from one girl to the next until he finally winds up with Susan, who has a crush on him. Thoroughly this scene, Gregory's aim of getting Dorothy, the girl he truly likes changed to getting any girl. Characterization I was cast as Susan. From my interpretation, I think Susan is a fairly confident, seductive, flirty and cheerful character. She appears to like Gregory quite a lot, with the help of her friends; she finally got to go out with Gregory. Throughout the scene, Susan taking the initiative to make moves on Gregory. Susan first appeared in Scene 6, the cookery class. In that scene, there was no indication that Susan likes Gregory. Extract from that scene: (Susan approaches Steve. She is wearing a worried look and a grotty apron) Susan: Steve, can you help me out with this pastry mix thing? Gregory: Hello, Susan (Gregory is ignored.) Steve: Pastry? What pastry? (Continues) Perhaps at that point, Susan still did not develop her crush on Gregory. ...read more.

so I think she's quite confident. I have to portray her character using my actions. When Carol called Susan on the phone, I mimed talking on the phone to portray that I am the one Carol is talking to on the phone. When Margo told Susan Gregory was a s*x maniac, I nudged her slightly while I said my line "...how 'bout resisting abreast?" to portray the fact that I am teasing her. I turned my body towards Gregory at times and held eye contact while he talked and looked at the audiences at times. Props We did not use any props in our performance. All the props (such as Eric's camera) were mimed. Lines Given the amount of time, I think we have memorized our lines pretty well. I spent a lot of time trying to memorize all my lines. I used thought tracking to try to understand how to say my lines. Points I used to think about my line delivering >What is she thinking now? >Is there a difference between what she's thinking and what she's saying? >Should she speak at a faster pace or a slower pace? Other skill we used We used crosscutting, repetition to mark the moment. Mark the climaxes. Every time we reached a climax in the scene, the characters in the scene will freeze and the other characters not in the scene will run onto stage and repeat that line in different voices and tones. ...read more.

She could improve by speaking louder and clearer. Her tone was too flat and not dramatic enough. She was facing Gregory most of the time and standing sideways so the audiences can hardly see her. She should turn her body towards the audience. I portrayed Susan as a flirty and seductive character. I turned my body towards Gregory at times and made eye contact with the audiences. When Susan and Gregory were dancing on the floor, we turned our bodies at an angle so the audiences can see us properly and see our facial expressions. I acted startled and embarrassed when Eric interrupted Gregory and Susan while they were dancing on their back. Amendments: If I could make any changes we would probably have spend a lot more time working on our lines. I could improve by memorizing my lines even better because there was one point when Anthony (playing Gregory) forgot his lines and we had a pause. If I knew my lines even better, I could have just skipped his line and go on with the performance, but I memorized the lines by responding to what Gregory says. I think our group worked very well in all aspects. Especially Joyce (who was playing Madeline) and Sacha (playing Richard) had done especially well; they were very in character and did a really good portrayal of the characters. We delivered a fairly well polished final production in the short amount of time. Our group worked very well together and interacted sufficiently. 1 1 ...read more.