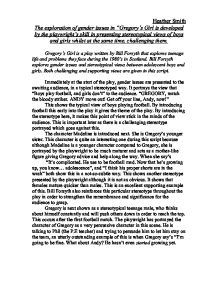 The exploration of gender issues in &quot;Gregory's Girl&quot; by Bill Forsyth, is developed by the playwright's skill in presenting stereotypical views of boys and girls whilst at the same time, challenging them.

Heather Smith The exploration of gender issues in "Gregory's Girl is developed by the playwright's skill in presenting stereotypical views of boys and girls whilst at the same time, challenging them. Gregory's Girl is a play written by Bill Forsyth that explores teenage life and problems they face during the 1980's in Scotland. Bill Forsyth explores gender issues and stereotypical views between adolescent boys and girls. Both challenging and supporting views are given in this script. Immediately at the start of the play, gender issues are presented to the awaiting audience, in a typical stereotyped way. It portrays the view that "Boys play football, and girls don't" to the audience. "GREGORY, watch the b****y striker. ANDY move out! Get off your line, Andy, now!" This shows the typical view of boys playing football. By introducing football this early into the play it gives the theme of the play. By introducing the stereotype here, it makes this point of view stick in the minds of the audience. This is important later as there is a challenging stereotype portrayed which goes against this. The character Madeline is introduced next. She is Gregory's younger sister. This character is quite an interesting one during this script because although Madeline is a younger character compared to Gregory, she is portrayed by the playwright to be much maturer and acts as a mother-like figure giving Gregory advice and help along the way. ...read more.

This scene stereotypes the 'non-existent' relationship between a teenager and their parents. Again, this makes the audience focus on their own real-life situations and relationships. " (Sarcastically) why don't we plan to meet up sometime soon. Say breakfast, later in the week. Say eight o'clock in the kitchen, Friday? Your mother would like that." By doing this, it creates obvious sarcasm. This, it strengthens the thoughts within the audience of their own relationships with either parents or children. By using sarcasm to express this, it brings across the supporting stereotype in a more subtle way. "Gregory: Hi Mike, Father: Call me Dad, Gregory, or pop or something." This dialogue also shows the fact of the stereotype between parents and their teenage children. This is a real-life situation and an everyday occurrence. Bill Forsyth has done this to make the play more believable and down to earth. By representing the stereotype in this way, it makes it easier to relate to the whole play, not just this scene. This also makes the audience question the stereotypes presented by the playwright. Scene 5 is quite an important scene when exploring stereotypical gender issues as the stereotype presented is quite a common judgement to be made. This gender presented Stereotype is that only boys play football and girls do not. ...read more.

In a way, this could support the stereotype in that s*x is always on teenager's minds. However, it could also challenge it in the way that s*x is always on male teenager's minds and female teenagers are sweet and innocent. Either way that the viewer interprets does not matter as it works well both ways. The playwright has cleverly done this because no matter which way it is seen it will still have the same effect. The character, Gregory, is a very interesting one as he is portrayed by the playwright to be two different people, almost like a split personality. One side of his personality shows when he is with his sister. This is shown when the character Madeline, Gregory's sister, say's "You were good to me when other boys hated their sisters". The other side of this characters personality is when he is in company with his friends. Where he is more relaxed and is more like a 'normal' teenager. Throughout the play, all of the stereotypes presented by the playwright are reinforced and challenged repetitively to remind the audience and strengthen them. The playwright has constantly done this with different stereotypes to create contrast and conflict within the viewer/ readers' mind. By using techniques such as sarcasm and wit, along with many others that I have previously mentioned throughout this analysis, Bill Forsyth has presented gender issued stereotypes in an extremely effective way. Overall, I think Bill Forsyth has made a success of doing this. ...read more.