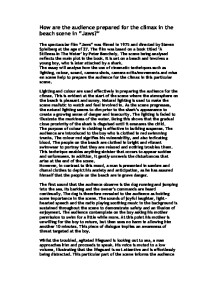 How are the audience prepared for the climax in the beach scene in &quot;Jaws?&quot;

How are the audience prepared for the climax in the beach scene in "Jaws?" The spectacular film "Jaws" was filmed in 1975 and directed by Steven Spielberg at the age of 27. The film was based on a book titled 'A Stillness In The Water' by Peter Benchely. The scene being analysed reflects the main plot in the book. It is set on a beach and involves a young boy, who is later attacked by a shark. The essay will analyse how the use of cinematic techniques such as lighting, colour, sound, camera shots, camera edits/movements and mise en scene help to prepare the audience for the climax in this particular scene. Lighting and colour are used effectively in preparing the audience for the climax. This is evident at the start of the scene where the atmosphere on the beach is pleasant and sunny. Natural lighting is used to make the scene realistic to watch and feel involved in. As the scene progresses, the natural lighting seems to dim prior to the shark's appearance to create a growing sense of danger and insecurity. The lighting is faded to illustrate the murkiness of the water. ...read more.

Following this, a girl screams whilst frolicking around with her boyfriend in the water. The lifeguard is mislead by this and jumps up, alarmed and startled. The audience instantly feel that something horrific has arisen due to the lifeguard's reaction. Subsequently, a feeling of uncertainty begins to build up because the audience have no doubt that something devastating may occur. This is understood from the lifeguard's body language and the uses of sound that emphasise this idea. A while before the shark features, a small boy is centralised on the screen who is playing with sand and singing contently to himself. These two extremes are successful in the build up to a climax, on account of the innocence of the boy, which contrasts greatly with the menace and peril that the shark posses. When the shark approaches the surface of the water, a piece of music alike our heart beating is played. The music guides the audience's own heartbeat into imitating it, along with the unease that swiftly rises predominantly in the scene. The music amplifies and accelerates to the chaos of parents rescuing their children from the water. ...read more.

People typically wear less clothing on a beach, denoting insecurity in this scene. In advance to the shark's vicinity to the boy, a shot of the dog's stick drifting in the water conveys a missing presence, therefore developing unease among the audience. Furthermore, after the boy is taken, his mother is highlighted with a yellow hat. This makes certain that the audience's regard is only on her. As the concluding shot, a mangled lilo dispersed in b****y water drifts up on the seafront. This gives guidance in stressing the grievance and affliction to the audience. Based on all the points conceived, I can conclude that the overall use of cinematic techniques are effective in building tension and suspense in the climatic scene. Each technique emphasises this powerfully and combined produces an even greater impact. I found that sound was used exceptionally well in achieving this. The music that is played as the shark draws nearer the surface provides an increasingly tense atmosphere among the audience. The many differential contrasts in sound that are used also trigger the knowledge of something fatal and disastrous to arise. As to the success of the film, it grossed $745 million worldwide, enhancing the vast influence on the audience. ?? ?? ?? ?? ...read more.