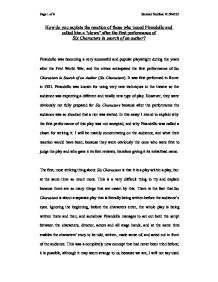 How do you explain the reaction of those who booed Pirandello and called him a &quot;clown&quot; after the first performance of Six Characters in search of an author?

This was too much; for them it was too real. The idea that the director's words reflected the audience's thoughts is no coincidence. Throughout the play the director is used as a mirror to reflect what Pirandello predicts to be the audiences reaction. After all, the director is in exactly the same situation as the audience only more involved. The director starts off by being annoyed at the interruption ("Would you please do me a favour and leave. We have no time to waste on crazy people" 11), he then goes on to being very intrigued ("Perhaps something really extraordinary could come of all this." 30). From there he becomes excited, amazed and finally horrified and scared ("When the DIRECTOR sees them, he is terrified and jumps from the stage." 66). If the play were reality then what would the director have done next? This does not concern Pirandello and he obviously does not tell us; but he knows the audience will be left, just as the director is, without knowing how to answer the questions the play has put to them. Pirandello had tried to, not re-model, but re-create theatre and, as far as they could see he had failed, it would take much more than one performance to make this style accepted. ...read more.

We hear one thing and through our own experiences turn it around to mean something completely different. This is surely incorrect, we all speak the same language, how can an author, a master of literature, come up with such an absurd notion? It may not be so absurd in the twenty first century, but in 1921 the idea would have been ridiculous. Pirandello rewrote the rules of the theatre with Six Characters. The line between reality and illusion was too thin for its first audience, the questions he asks are too hard to answer but, at the same time, too close to the truth. He has exposed the theatre at its basest form and, while doing this, created a horror scene that people were not willing to accept as art. He was called a clown and, perhaps, at the time, rightly so because he changed the structure and style to plays and ignored what his director and most other playwrights of the time were saying: "This is the theatre! The truth only goes just so far!" (48). However, in doing this Pirandello is now recognised as a true modernist because he really did introduce new techniques, he made an impact on the literary world but it took a little time to be recognised as something to be celebrated and not revoked. Word Count: 2,016. ...read more.