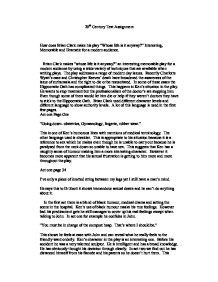 How does Brian Clark make his play &quot;Whose life is it anyway?&quot; Interesting, Memorable and Dramatic for a modern audience.

20th Century Text Assignment How does Brian Clark make his play "Whose life is it anyway?" Interesting, Memorable and Dramatic for a modern audience. Brian Clark makes "whose life is it anyway?" an interesting memorable play for a modern audience by using a wide variety of techniques that are available when writing plays. The play addresses a range of modern day issues. Recently Charlotte Wyatt's case and Christopher Reeves' death have broadened the awareness of the issue of euthanasia and the right to die or be resuscitated. In some of these cases the Hippocratic Oath has complicated things. This happens in Ken's situation in the play. He wants to stop treatment but the professionalism of the doctor's are stopping him. Even though some of them would let him die or help if they weren't doctors they have to stick to the Hippocratic Oath. Brian Clark used different character levels and different language to show authority levels. A lot of this language is used in the first few pages. Act one Page One "Going down- obstetrics, Gynaecology, lingerie, rubber wear." This is one of Ken's humorous lines with mentions of medical terminology. The other language used is cheekier. This is appropriate to his situation because it is a reference to s*x which he makes even though he is unable to carry out because he is paralysed from the neck down so unable to have s*x. ...read more.

I think Ken also feels dismal and depressed. In act one we get an introduction of the characters and the plot is going to start developing. The main characters that we are introduced to are ken, Dr Emerson, Dr Scott, Nurse Sadler and Sister. In this act we also find out that all the medical personnel have different feelings about Ken's situation. The sister appears but does care for Ken. Act one Page 3: "If she still feels like that after five minutes with you, we'll make a nurse out of her yet." Sister says this but it is obvious that she is joking. I think if she didn't like Ken or was too professional then she would not do that. Nurse Sadler is a new nurse and has had no previous experience with a patient like Ken therefore she does not know how to handle him and his condition and humour. "Do you want some water?" Ken replies to this with his usual cheeky sense of humour. "That would be good... Chateau Ogston reservoir, I think with just a cheeky little hint of jeyes fluid fro the steriliser." This shows with Ken the simplest of things could turn into a joke which I imagine would be quite hard to deal with. Now we move onto Dr Scott she likes Ken and feels sorry for him but they are attracted to each other. ...read more.

The audience seeing this play would probably go through a range of emotions. At one point Ken's humour and light mood about his injuries might make you think that Dr Emerson was right in thinking that Ken should live. However later on when Ken reveals his true feelings to John you can see why he wants to die and how depressed and alone he feels. In my class the feelings where mixed some agreed with Ken and some didn't. However everyone changed their minds a least once and this shows how different parts of the play can effect the audience this makes the play more interesting, memorable and dramatic for a modern audience. The eventual outcome of the court case was that Ken could refuse treatment and die. Dr Emerson's attitude and no nonsense professionalism fall a little at the end. He agrees that Ken can stay in the hospital and die more comfortably than he would if he was on his own in a hotel or bed-sit. I think all the characters in the play and the audience are relieved to see Ken get his wish even if they don't agree with euthanasia. Everyone has different views but all the medical staff have stuck with him from the beginning. All in all I think Brian Clark wrote an amazingly modern day play that may addresses all the issues in 2005. ...read more.