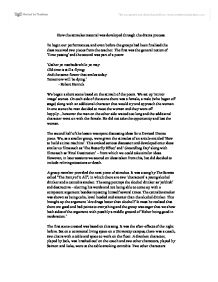 How the stimulus material was developed through the drama process.

How the stimulus material was developed through the drama process. To begin our performances, and even before the groups had been finalised the class received two pieces from the teacher. The first was the general notion of 'Time passing' and the second was part of a poem: 'Gather ye rosebuds while ye may Old time is still a-flying; And the same flower that smiles today Tomorrow will be dying.' - Robert Herrick We began a short scene based on the stimuli of the poem. We set up 'mirror image' scenes. On each side of the scene there was a female, a male (who began off stage) along with an additional character that would try and approach the woman. In one scene the man decided to meet the woman and they went off happily...however the man on the other side waited too long and the additional character went on with the female. He did not take the opportunity and lost the woman. The second half of the lesson was spent discussing ideas for a Devised Drama piece. ...read more.

It must be realised that there are good and bad points to everything and the group was eager that we show both sides of the argument with possibly a middle ground of 'Either being good in moderation.' The first scene created was based on this song. It was the after-effects of the night before. Set on a communal living space on a University campus, there was a couch, two chairs with a table and space to work on the floor. A drunken character, played by Jack, was 'crashed out' on the couch and two other characters, played by Saimon and Luke, were at the table smoking cannabis. Two other characters entered together from one side of the stage and began teasing 'Jack' for what had happened the night before. Another character, a class A drug addict, played by Kate entered and sat at the floor beginning to work. She complained to the others about the noise...however they ignored her and she stormed out. ...read more.

The audience) what they have done, why, and what they are going to do about it. The final piece of stimulus was the photo of Rachel Whitear, a heroin addict who was found kneeling in her room, clutching the needle in one hand. A photograph was taken of her in this position, and her parents decided to teach children about the effects of drugs by offering to show this picture and videos about Rachel to school children throughout the country. The image is very haunting and powerful, and we decided that we would display the picture in our heroin overdose scene. Originally the plan was for the character, played by Kate, to emulate the 'pose' on the stage, whilst the picture of Rachel was projected on the white wall of the drama studio. However we felt that the use of a projector would seem out of place in a play that purposefully lacks props, set design and only uses a small amount of lighting. We also decided that this would require us to use the projector throughout the performance and we would run the risk of the technology failing. ...read more.