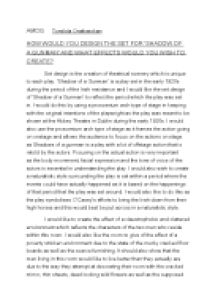 HOW WOULD YOU DESIGN THE SET FOR SHADOW OF A GUNMAN AND WHAT EFFECTS WOULD YOU WISH TO CREATE?

﻿AMDG Tomilola Onafowokan HOW WOULD YOU DESIGN THE SET FOR ?SHADOW OF A GUNMAN? AND WHAT EFFECTS WOULD YOU WISH TO CREATE? Set design is the creation of theatrical scenery which is unique to each play. ?Shadow of a Gunman? is a play set in the early 1920s during the period of the Irish resistance and I would like the set design of ?Shadow of a Gunman? to reflect the period which the play was set in. I would do this by using a proscenium arch type of stage in keeping with the original intentions of the playwright as the play was meant to be shown at the Abbey Theatre in Dublin during the early 1920s. I would also use the proscenium arch type of stage as it frames the action going on onstage and allows the audience to focus on the actions on stage as Shadows of a gunman is a play with a lot of offstage action that is retold by the actors. Focusing on the actual action is very important as the body movement, facial expression and the tone of voice of the actors is essential in understanding the play. I would also wish to create a naturalistic style surrounding the play is set within a period where the events could have actually happened as it is based on the happenings of that period that the play was set around. ...read more.

He runs back towards the entrance spins around and holds his head to the door while yelling ?I seen nothin? honest?.? The set is laid out in a very sparse fashion as this reflects the social class of the inhabitants. The windows are dirty and little or no light passes through them. They are located upstage behind white turned brown lace curtains which are shabby and torn right down the middle and frayed around the edges. On the right of the curtain is a dresser with b the top caked in dust. On the left of the curtain is a wash stand with a basin which Seumas uses in Act one. He goes over to the wash stand, takes a jug out and pours some water into the basin. As he is doing this some water spills and instead of cleaning it with a mop Seumas shrugs and tries to rub it out with his leg realising that it is a pointless attempt he shrugs and continues about his business. In front of the dresser is a metal framed bed that is angled at about 45 degrees. It has a space underneath which Maguire uses to store his suitcase in Act One. A thin sheet is spread along as well and a pillow which is slowly falling apart is placed at the head of the bed. ...read more.

Seumas then suggests he should burn it. A pause is then witnessed as the little paper crackles away in the fire while the men look into the fire and the fire ignites the fear that is mirrored in their eyes. Then sound of the engines slowly fades away and the two men let off an audible sigh of relief. To the right of the table is an arm chair with clothes hanging from its arms as Seamus can?t bother to keep them away. There is also a heap of clothes which are placed carelessly right in front of the Seamus, bed. This is where Seamus picks up his trousers from in Act One. He raises it against the light and inspects it for any obvious stains, shakes it out and pulls them on. This further shows Seamus as the untidy and careless fellow which he is. Seamus then goes over to pick up his briefcase which is lying idle just further downstage right. It contains all his merchandise as he is a sales man. As he slams it down on the floor just next to his bed a crack can be heard as the wooden panels on the floor cannot take such pressure. I would like the audience to have a feeling of irritation towards the untidiness of the whole set layout. Finally, I would like attention to be paid to the little details concerning the general aura of disarray and disorderliness surrounding the basic layout of the sat. ...read more.