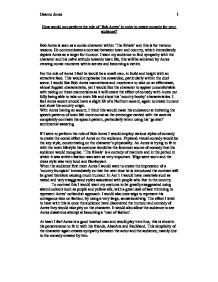 How would you perform the role of 'Bob Acres' in order to create comedy for your audience?

How would you perform the role of 'Bob Acres' in order to create comedy for your audience? Bob Acres is seen as a comic character within 'The Rivals' and this is for various reasons. He communicates a contrast between town and country, which immediately depicts Acres as a target for humour. I want my audience to find sympathy with the character and his na�ve attitude towards town life, this will be achieved by Acres creating comic moments within scenes and becoming a victim. For the role of Acres I feel he would be a small man, in build and height with an attractive face. This would emphasise his cowardice, particularly within the duel scene. I would like Bob Acres mannerisms and movement to take on an effeminate, almost foppish characteristic, yet I would like the character to appear uncomfortable with taking on these mannerisms as it will create the effect of comedy with Acres not fully being able to take on town life and show his 'country booby' characteristics. ...read more.

In Act 1 I would have materials such as tweed and very exaggerated styles associated with people who live in the country. To contrast this I would want my costume to be greatly exaggerated using absurd colours such as purple and yellow silk, with a great deal of lace trimming to represent Acres' outlandish approach. I would also uses wigs to represent his outrageous take on fashion, by using a very large, sensational wig. The effect I wish to have with this is once the audience have discovered the humour and comedy of Acres they would rake pity on the character. It would also allow the audience to see Acres disastrous attempt at becoming a 'man of fashion'. At heart I feel Acres is a good hearted man and would play him thus, this is show in his perseverance to fit in with his friends, Absolute and Faulkland. This simplicity of the character again creates sympathy between the actor and the audience, mainly due to the comedy created by him. ...read more.

At closer inspection of Acres discomfort the audience again would be made to feel sympathy with this character. The final 'duel' scene within the play would also reinforce the characteristics. He would again show his nervous characteristics by trying to avoid fighting and showing his inexperience at duelling. Firstly when Sir Lucius is trying to show Bob the distance the duellists must stand from each other, when this is happening I would have Acres trying to get as far away from the gun as possible, firstly by walking as far from Lucius as possible, and running around him dodging the barrel of the pistol. When Acres takes the pistol, I would play him very apprehensive of holding the pistol, having a limp wrist when holding it so it would droop to show Acres inexperience again. This would also create humour within the audience as the visual comedy would be almost farcical and highly entertaining as well and creating sympathy for the character and his tense situation. I feel the comedy would assist in this characters portrayal as any victim of humour can manipulate the audience, particularly if they display and innocence similar to Bob Acres. Deanne Jones 1 ...read more.