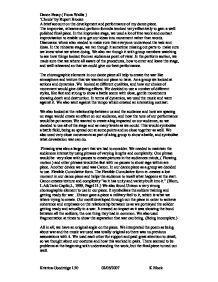 I have used a number of methods to explore the text and dance styles for our clouds piece using the improvise, rehearse and perform formula.

The improvise, rehearse and perform formula worked very effectively to gain a well polished final piece. In the improvise stage, we used a lot of free work and contact improvisation to enable us to get our ideas into movement rather than words. Discussion where also needed to make sure that everyone understood the task and ideas. In the rehearse stage, we ran though it sometime missing out parts to make sure we knew what we where doing. We also ran though it with group members watching to see how things looked from an audiences point of view. In the perform section, we made sure that we where all aware of the procedures, how to enter and leave the stage, and well rehearsed so that we could give our best performance. ...read more.

We wanted to create a big impacted on our audience, so we decided to use all of the stage and as many levels as we could. This would symbolize a battle field, being so spread out at some points and so close together as well. We also used very close movements as part of a big group to show a battle, and symbolize what devastation war can do. Phrasing was also a large part that we had to consider. We needed to maintain the audiences interest by using phrases of varying lengths and complexity. One phrase would be very slow with pauses to create pictures in the audiences minds, ( Flowing motion ) and other phrases would be fast with no pauses to show rage within are piece. Another device we used was Canon. ...read more.

It created an impact as it was showing the bond between all the soilders, the one thing they had in common. We also used fragmentation at times to show the separation that war can bring. (Being incomplete.) All in all, we have an original angle on the piece. We interpreted the poem as being about war and the music we used was totally original so there was no previous associations with it. We used each other for support and paid great attention to detail, so we thought about our costume and how this worked in pairs. There seemed to be problems at the beginning with understanding the work, but the final piece turned out well. Dance Essay ( Fiona Wallis ) 'Clouds' by Rupert Brooke A brief account on the development and performance of my dance piece. Kristina Goodridge L50 02/05/2007 K Block ...read more.