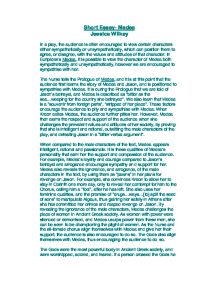 In Euripides's Medea, it is possible to view the character of Medea both sympathetically and unsympathetically, however we are encouraged to sympathise with her.

Short Essay- Medea Jessica Wilkey In a play, the audience is often encouraged to view certain characters either sympathetically or unsympathetically, which can position them to agree, or disagree, with the values and attitudes of that character. In Euripides's Medea, it is possible to view the character of Medea both sympathetically and unsympathetically, however we are encouraged to sympathise with her. The Nurse tells the Prologue of Medea, and it is at this point that the audience first learns the story of Medea and Jason, and is positioned to sympathise with Medea. It is during the Prologue that we are told of Jason's betrayal, and Medea is described as "bitter as the sea...weeping for the country she betrayed". We also learn that Medea is a "souvenir from foreign parts", "stripped of her place". These factors encourage the audience to pity and sympathise with Medea. ...read more.

She also uses her feminine qualities, and the promise of "drugs...ways...[to] spill the seed of sons" to manipulate Aigeus, thus gaining her safety in Athens after she has committed her crimes and reaped revenge on Jason. By revealing the ignorance of the male characters, Medea challenges the place of women in Ancient Greek society. As women with power were silenced or demonised, and Medea usurps power from these men, she can be seen to be championing the plight of women. As the Nurse and the all-female chorus align themselves with Medea and give her their support, the audience is also encouraged to do so. The Gods also align themselves with Medea, thus encouraging the audience to do so. The Gods were the most powerful body in Ancient Greek society, and were worshipped, adored, and feared. If a person crossed the Gods he or she would be punished. ...read more.

The fact that Medea is rewarded for her deeds, positions the audience to construct her deeds as noble, thus they are again encouraged to sympathise with her. During this final scene, Medea is also physically and metaphorically lifted above the rest of the cast, symbolising her final power and triumph over the patriarchal society she had challenged. The Chorus and the Gods, thus encouraging the audience to see Medea as noble, and thus sympathise with her, applaud this 'victory'. In conclusion, Euripides's encourages the audience to sympathise with the character of Medea, in order to challenge the values and attitudes of Ancient Greek society. He does this by constructing Medea as a strong, independent woman, aligned with the gods and the women of the play. Her courage and personal conflict when plotting, and carrying out, her revenge on Jason, and her final reward from the gods for succeeding, encourage the audience to empathise with her, and see her deeds as necessary in her fight against the plight of women. ...read more.