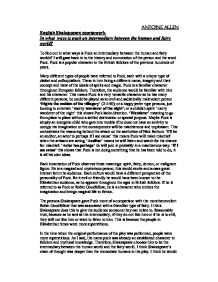 In what ways is puck an intermediary between the human and fairy world?

Antoine Allen English Shakespeare coursework In what ways is puck an intermediary between the human and fairy world? To find out in what ways is Puck an intermediary between the human and fairy worlds? I will gaze back in to the history and connotation of the person and the word Puck. Puck is a popular character in the British folklore of the previous hundreds of years. Many different types of people have referred to Puck, each with a unique type of dialect and colloquialism. These in turn bring a different name, imagery and their concept and view of the ideals of spirits and magic. Puck is a familiar character throughout European folklore. Therefore, the audience would be familiar with him and his character. This means Puck is a very versatile character as he has many different persona; he could be played as an evil and sadistically malevolent person 'frights the maiden of the villagery' (2:1:40); or a happy jester type persona, just looking to entertain 'merry wanderer of the night'; or a childish spirit 'merry wanderer of the night' this shows Puck lacks direction. 'Wanderer' meaning to go from place to place without a settled destination or special purpose. Maybe Puck is simply an energetic child who gets into trouble if he does not have an activity to occupy his imagination or the consequences will be mischievous and unpleasant. This orchestrates the reasoning behind the attack on the aesthetics of Nick Bottom. 'I'll be an auditor, an actor to perhaps if I see cause' this means Puck will make mischief when the artisans are acting. 'Auditor' means he will listen and watch for his chance for mischief. 'Actor too perhaps' he will join in probably in a mischievous way. 'If I see cause' this shows that Puck is not doing something that he has been told to do, it is all his own ideas. ...read more.

In addition, he lets a fairy finish off the last rhyme. Therefore, in the rhyming scheme, it is not at the end but it is at the end of his paragraph. I think Shakespeare does this because he wants to show Puck admiration and respect for Oberon. 'But room fairy: he comes Oberon' a fairy says 'and here my mistress. Would that he were gone!' the words are Oberon and gone. This also shows that a fairy speaks in rhyme and she serves the fairy queen 'I serve the fairy queen'. Shakespeare gives a great metaphor before 'swifter than the moon's sphere' this means she will go quicker than the moon orbiting around the world, when it wanders. As at the time of the play people did not no as much as, we do now about astronomy and the orbit of the planets and their moons, so they believed the moon had no set course. In addition, it insinuates that Puck serves the fairy king. Puck tells the audience that the queen has made Oberon angry ' Oberon is passing fell and wrath' Puck is being an intermediary at this point as he informs the audience the events in the play. Shakespeare let the audience know Oberon is angry from 'wrath'. Even though Puck is a jester type person the audience would trust him because Oberon the king of the fairies trusts him and tells him his stories 'thou remberest... I sat upon a promontory' Oberon asks puck if he remembers, meaning Oberon has let him into one of his special events in his life. Puck say 'I remember' showing he remembers. All through this part, Puck has been an intermediary to the audience on the events so far in the play. He connects the two worlds together. A fairy describes what kind of a person Puck is 'frights the maiden of the villagery', 'maidens' they are humans, so Puck is bringing his own fairy world to the humans, he is intermediating but in a mischievous way. ...read more.

I think Puck enjoys the chaos of the play from the 'ho ho ho'. I also think he is a loyal servant to Oberon so although he enjoys he chaos, he must do his orders to the best of his abilities. Puck, with his usual mischievous gleam, offers us this apology. If you didn't like the play, he says, just pretend that you have "slumb'red here, ... While these visions did appear." In that case, all you have seen is "but a dream." Like Theseus, you can pretend that it was all some airy construction of the imagination. Like the lovers you can cover it over, as if the dream were best forgotten. Alternatively, like Bottom you can test it, move toward it, glimpse it, respect its power, and think it over. In the end Shakespeare teases you, pretends innocence, and leaves the serious matter of his comedy for you, the reader, or viewer, to judge. Puck admits he is just an actor; theatre and spirit magic are the two sides of his persona. If he can escape the hisses from his audience, he will play the part the best he can. If you befriend him with your applause, he will befriend you with his magic. Puck gives a fitting end to the play, as the audience has come to love the little fellow known as Robin Goodfellow. He tells them the morals behind the play. He does this in a melodical way, Shakespeare does this because the audience already knows that when Puck speaks in blank verse he is serious and not happy. So Shakespeare gives them the happy rhythmic Puck, which will give the audience something they can be at ease with. Puck is an intermediary; he joins the fairy world and the human world. He does this through verse with rhyming and blank verse, and many metaphors. He also does this through dialogue with other characters such as a fairy and Oberon. He makes a fitting and good intermediary because he is involved in every story line. ...read more.