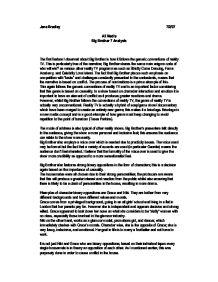 Jane Bradley 7/2/07 A2 Media Big Brother 7 Analysis The first feature I observed about Big Brother is how it follows the generic conventions of reality TV. This is particularly true of the narrative; Big Brother shares the same main enigma code of who will win? as various other reality TV programmes such as Strictly Come Dancing, Fame Academy, and Celebrity Love Island. The fact that Big Brother places such emphasis on competition with "tasks" and challenges constantly presented to the contestants, means that the narrative is based on conflict. The process of nominations is a prime example of this. This again follows the generic conventions of reality TV and is an important factor considering that this genre is based on causality. In a show based on character interaction and emotion it is important to have an element of conflict as it produces greater reactions and drama. However, whilst Big Brother follows the conventions of reality TV, the genre of reality TV is actually very unconventional. Reality TV is actually a hybrid of soap/game show/ documentary which have been merged to create an entirely new genre; this makes it a bricologe. Bricologe is a new media concept and is a good example of how genre must keep changing to avoid repetition to the point of boredom (Tessa Perkins). ...read more.

E.g. by continuously showing clips of Grace b******g exaggerates her nastiness and portrayed her as a villain. Big Brother uses this to get a greater reaction from the public with the aim of keeping in the housemates that provide the most entertainment. Big Brother also retains the power to influence the viewer's opinion of the housemates through shot composition and editing; this can completely change or form the representation of a housemate. This is extremely important as the housemates were all chosen to play different parts and portray different stereotypes therefore Big Brother aims to represent them as their allotted characters. An example of this is Niki's portrayal as a spoilt yet loveable drama queen; the programme is edited in a way that shows her tantrums in a humorous light. This was particularly true in the run up to her and Grace's eviction, when it was quite obvious Big Brother wanted Niki to remain in the house. Glyn is another example of stereotypical representation, being represented as your typical oversexed, slightly naive, awed country boy. Big Brother again had a part to play in this representation by focusing on his naive comments and fantasising. ...read more.

Big Brother recognise this need and addresses it with its uniquely diverse household. The ideology promoted by Big Brother is a shallow one, with the importance of fame, popularity, and winning being either embedded or promoted by the housemates. It implies that society is based on competition, and that personal relationships can be used as a tool to get what you want. These ideologies have prompted much criticism from the media. However, the institution behind Big Brother, Endamol, will continue with its controversial winning formula so long as it keeps audience figures up. This is because Endamol is a major commercial institution meaning that its main priority is profit. It is behind many other successful TV productions such as Desperate Housewives and Lost. The popularity of Big Brother has resulted in it branching off into a mini-subculture with supporting programmes such as "Big Brother's Big Mouth", "Big Brother's Little Brother" and "Diary Room Uncut". It has even got its very own column or page in most tabloid newspapers dedicated the happenings inside the Big Brother house. This reflects the amazing popularity and influence Big Brother holds in today's society, the key to its success? It is a reflection of society and we as a race are constantly trying to analyse and explain our own behaviour, Big Brother is essentially a glass cage in which we can curiously peer. ...read more.