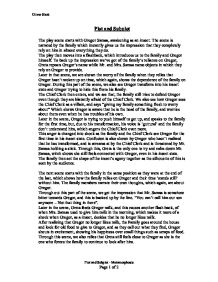 Plot and Subplot The play scene starts with Gregor Samsa, awakening as an insect. The scene is narrated by the family which instantly gives us the impression that they completely rely on him in almost everything they do. The play then moves into a flashback, which introduces us to the family and Gregor himself. To back up the impression we've got of the family's reliance on Gregor, Greta repeats Gregor's name while Mr. and Mrs. Samsa name objects in which they rely on Gregor to provide. Later in that scene, we are shown the worry of the family when they relies that Gregor hasn't woken up on time, which again, shows the dependence of the family on Gregor. During this part of the scene, we also see Gregor transform into his insect state and Gregor trying to hide this from his family. The Chief Clerk then enters, and we see that, the family still tries to defend Gregor even though they are blatantly afraid of the Chief Clerk. We also see how Gregor sees the Chief Clerk as a villain, and says "giving my family something fresh to worry about" Which ...read more.

Samsa used to give him milk in the morning, which makes it more of a shock when Gregor, as a insect, decides that he no longer likes milk. After realizing that Gregor no longer likes milk, the Family goes around the house and look for old food to give to Gregor, and as they call out what they find, Gregor shouts in excitement, showing his happiness over small things such as scraps of food. Through this scene, we also relies that Greta still feels close to Gregor as she is the one who forces the family to continue to look after him. Later in this scene, we are shown why the father has acted bitter towards Gregor. "It's my house"..."Is it?" this line shows that Mr. Samsa has had his authority undermined. This is made worse by Greta and Mrs. Samsa, mocking Mr. Samsa. "Don't look at me as if I was some idiot you had to humor." There is then a passing of several days, and the family is still talking about Gregor, which again, backs up the fact that the family was completely reliant on Gregor. ...read more.

Samsa being shocked and Mr. Samsa attacking Gregor. Mr. Samsa eventually throws a apple that gets stuck into Gregor's back, this cause both physical and emotional pain from Gregor, and he feels his family have given up on him. The next scene starts as Gregor's dream. But then goes back into reality, where Gregor's family have stopped feeding him and his father has completely given up on him, although Greta and Mrs. Samsa still have little hope. In the final Scene of the play, 3 lodgers come to stay at the house, and they seem to be satisfied with the house, but as Greta plays the violin, Gregor comes out to listen to her play for the last time, as the lodgers see Gregor and leave in disgust. At this point, Greta finally gives up all hope that there is any chance of bringing Gregor back to his original state, and feels as though the "creature" is no longer Gregor. After this, Gregor slowly returns to his room where he quietly dies. Finally, Optimism is returned to the family, as Gregor has finally left them, and they can get on with their lives without him. ?? ?? ?? ?? Oliver Slark Plot and Subplot - Metamorphosis Page 1 of 2 ...read more.