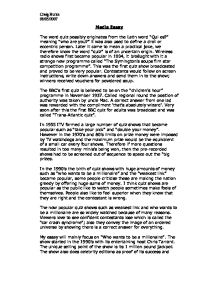 My essay will mainly focus on

Media Essay The word quiz possibly originates from the Latin word "Qui es?" meaning "who are you?" it was also used to define a droll or eccentric person. Later it came to mean a practical joke, we therefore know the word "quiz" is of an uncertain origin. Wireless radio shows first became popular in 1934, it bro8ught with it a strange new programme called "The Symington's soups film star competition programme". This was the first quiz show broadcasted and proved to be very popular. Contestants would follow on screen instructions, write down answers and send them in to the show; winners received vouchers for powdered soup. The BBC's first quiz is believed to be on the "children's hour" programme in November 1937. Called regional round the position of authority was taken by uncle Mac. A correct answer from one lad was rewarded with the compliment 'that's absolutely wizard'. Very soon after this the first BBC quiz for adults was broadcast and was called "Trans-Atlantic quiz". In 1955 ITV formed a large number of quiz shows that became popular such as "take your pick" and "double your money". However in the 1970's and 80's limits on prize money were imposed by TV watchdogs and the maximum prize would be the equivalent of a small car every four shows. Therefore if more questions resulted in too many minis's being won, then the pre-recorded shows had to be screened out of sequence to space out the "big prizes. ...read more.

This gives it a "gladiatorial" feel. A friend or family member is seated behind the contestant so that he/she feels intimidated by having a "loved one" watching them and maybe scrutinising them, which makes the contestant feel less confident and therefore maybe putting more unnecessary pressure upon them. Music also adds a lot of tension. The recognisable theme tune is a symbol of the show. It tries to reflect what type of programme it is. The theme tune is tense, dramatic and slightly dangerous it also gives the impression of stumbling and falling. The volume of the music rises as the tension increases like when Chris Tarrant is going to tell the contestant that their answer is wrong or right. During "fastest finger first" and "phone a friend" there is a clock ticking this creates tension because it emphasises the importance of what you are doing such as helping the contestant to reach his/her goal. The clock ticking also puts pressure on the person and makes them feel like they have a lot less time than they actually do. From the �1000 mark upwards there is the constant sound of a heartbeat which may seem simple enough however to the contestant it unknowingly increases the pressure upon them as it makes them more nervous than they would be without the heartbeat. The show always seems to end before the end one of the answers is revealed. ...read more.

The show is diverse and completely different to anything on television before. It is modern and the prize is bigger than any game show before it has offered to win in one single show. I think that when the game show first came out it wasn't as widely watched because people thought it to be just like all the others yet in March 1999 the highest ratings for the show were recorded when 19.2 million people tuned in to watch the unfolding drama. Personally I have watched the show on a number of different occasions and for the first few times it is enjoyable to watch however after that it just becomes repetitive and boring. I feel that the possible million pound prize money is a very unique selling point as there are no other shows where u can win that much in one sitting. Yet I don't feel that the show would be as interesting without that much prize money. For how long the show has been on and the amount it could have given away it has only handed over one million pounds four times. Seven people have viewed the million pound question but decided not to risk it and have simply left with �500,000. Overall throughout 344 shows and 15 series they have only given out 40 million pounds which isn't much considering over the years they might have had to pay out much more if everyone achieved the million pound mark? Craig Burke 08/05/2007 ...read more.