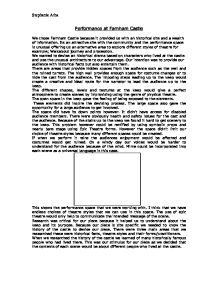 Performance at Farnham Castle We chose Farnham Castle because it provided us with an historical site and a wealth of information. Its an attractive site with the community and the performance space is unusual offering us an alternative area to explore different styles of theatre for example; Walkabout journey and procession. We wanted to devise an historical drama based on characters who lived at the castle and use the unusual architecture to our advantage. Our intention was to provide our audience with historical facts but also entertain them. There are areas that provide hidden spaces from the audience such as the well and the ruined turrets. The high wall provides enough space for costume changes or to hide the cast from the audience. The imposing steps leading up to the keep would create a creative and ideal route for the narrator to lead the audience up to the keep. The different shapes, levels and textures at the keep would give a perfect atmosphere to create scenes by improvising using the genre of physical theatre. The open space in the keep gave the feeling of being exposed to the elements. These elements did inspire the devising process. The large space also gave the opportunity for a large audience to get involved. The space did have its down points however. It didn't have access for disabled audience members. There were obviously health and safety issues for the cast and the audience. Because of the stairs up to the keep we found it hard to get scenery to the keep. This problem however could be rectified by using symbolic props and nearly bare stage using Epic Theatre forms. However the space didn't limit our choice of theatre styles because many different spaces could be created. If when we perform it rains the audiences enjoyment would be affected and costumes would get ruined. On a windy day our voices would be harder to understand for the audience because of the wind. ...read more.

Scene four In this scene we wanted to express the emotions of the plague victims to the audience. We used various forms and devices from different practitioners these were: Lea Anderson, Christopher Bruce and Brecht. After studying Lea Anderson's 'Flesh and Blood' we decided that her technique of gestures to communicate was a good way of communicating the plague victims emotions in this scene. These are our original gestures that we put together in various orders: * Spread fingers and thumb out of mouth = cough * Fingers walking up arm = rats * Fingers walking over chest = fleas * Arms crossed/fists clenched = cross * Arms crossed over chest = death * Arms stretched out in profile to audience = despair We also used the device of using two-dimensional work in profile and facing the audience. We included head rolls allowing a leader and subservient role and the laid to rest motif also used in 'Flesh and Blood'. Scene Five Scene five begins with an execution speech by Charles 1st making use of a monologue and a word-scape to reiterate the speech and the more important elements of it. We wanted to make this scene as realistic as possible so for the rest of our cast who were not in this scene became part of the crowd and shouted to encourage the execution (in research we discovered that this is how towns people would of reacted). Whilst we used one actor to portray Charles 1st, the group were moving through a succession of frozen tableaux also performing the word-scape simultaneously. These tableaux included influences from Lea Anderson such as floor work, laid to rest, two-dimensional work and eye gestures. These devises added to abstract and contemporary feel of the scene. Other techniques we used were from the practitioner Brecht. We were in symbolic costume allowing the actor playing Charles 1st to have a moustache and the executioners to wear black hoods. ...read more.

I felt that audience wasn't always focussed on the performance because they were watching others getting ready for different scenes, this couldn't be helped however, this could only be improved by actors being hidden from site which can not be achieved at the Keep. When Chris ordered the audience to 'Bow down their heads' the audience didn't, this also could have been achieved by an audience in rehearsal. The audience responded to the singing in this scene and clapped along, this was because members of our cast who were not in this scene stood in the audience and clapped along to encourage the audience. The audience didn't react to the theatre of cruelty technique that we used in the Plague scene. The reaction that we wanted was for the audience to start itching when the actors did, although we didn't get this response the audience did feel awkward and started to step backwards. In the Charles the 1st scene when actors were heckling the audience looked intimidated we had hoped that possibly the audience would join in and heckle Charlotte. I feel that this could have been improved if we had an audience in our dress rehearsal, because then we could of developed our piece through the different process areas. Although our performance didn't go to plan in some areas we have achieved what we had wanted to achieve, this was ' to educate and entertain our audience'. This was defiantly achieved because we devised a piece that was factual and educated, also from asking members of the audience about the performance I was informed of the enjoyment of the performance. All of this was achieved through research and the devising process. The idea of a journey I felt made the performance more informative and also made the audience feel involved. The performance was a successful piece of theatre, although it had its faults it achieved our aim and was enjoyable to watch. Our hard work resulted in an entertaining and educating performance. Stephanie Atha ...read more.