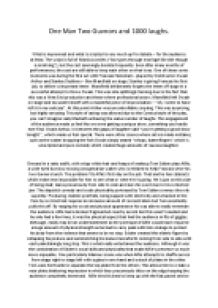 Review of the comedy in &quot;One Man Two Guvnors&quot; .

﻿One Man Two Guvnors and 1000 laughs. What is improvised and what is scripted is very much up for debate ? for the audience at least. The script is full of hilarious smiles (?love goes through marriage like s**t though a small dog?), but the cast seemingly deviate frequently. Even after many months of performances, the cast are still able to keep each other on their toes. One of these comic moments was during the first act with Francais Hensshall ? played by Welsh actor Owain Arthur and Stanley Stubbers ? Ben Mansfield on stage. Stanley is giving Francais his first job, to deliver a important letter. Mansfield deliberately forgets the letter off stage in a successful attempt to throw Owain. This was side splittingly funning due to the fact that this was a West End production and these where professional actors. ...read more.

The problem? Its Alfie?s first day on the job. That and he has cataracts which make near impossible for him to see what or where he is going. He is just on this side of being deaf, leans precariously from side to side and slurs his word due to his contorted jaw. The slapstick comedy and crude physicality portrayed by Tom Edden conveys the role superbly. Producing realistic prat falls, being zapped with electricity and whacked in the face by a cricket bat requires an immense amount of concentration but Tom excellently pulls this off. By ranging his vocal and physical appearance his was able to easily entertain the audience. Alfie had a broken fragmented country accent but this wasn?t needed and he only had a few lines, it was the physical aspect that had the audience in fits of giggles. ...read more.

Alfie tries his best to keep up with the fast paced service but struggles as Owain bounces from one Guvnor to the other like a ping pong ball. Alfie finds stairs and doorways and plates and everyday objects to be of herculean trail. This is perfectly portrayed as Alfie is constantly smacked in the face by doors and cricket bats, mainly from the uncaring Stanley Stubbers. At one point Alfie begins to whirl like a spinning top when his pace maker is set to the wrong speed. The culmination of the first act comes to a death defying, lung shattering end when Francais, frantically bouncing back and forth, accidently pushes Alfie down the stairs. As Edden is actually fairly young, 33, he can quite easily hurl himself down the stairs to the immense enjoyment from the audience. Every time that he did there were short gasps followed by tremendous laughter. ...read more.