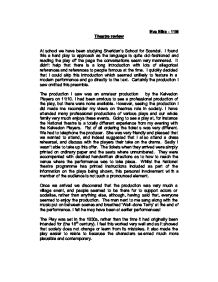 Eva Elks - 11M Theatre review At school we have been studying Sheridan's School for Scandal. I found this a hard play to approach as the language is quite old-fashioned and reading the play off the page the conversations seem very mannered. It didn't help that there is a long introduction with lots of allegorical references and references to people famous at the time. I quickly decided that I could skip this introduction which seemed unlikely to feature in a modern performance and go directly to the text. Certainly the production I saw omitted this preamble. The production I saw was an amateur production by the Kelvedon Players on 11/10. I had been anxious to see a professional production of the play, but there were none available. However, seeing the production I did made me reconsider my views on theatres role in society. I have attended many professional productions of various plays and our whole family very much enjoys these events. ...read more.

The man next to me sang along with the music put on between scenes and breathed 'Well-done Terry' at the end of the performance. I felt he may have been at earlier performances! The Play was set in the 1930s, rather than the time it had originally been intended for (the 18th century). I feel this worked very well and as it showed that society does not change or learn from its mistakes. It also made the play easier to relate to because the characters seemed much more plausible and contemporary. The costumes were mostly characteristic of the 1930s, but in many cases I feel that rather than finding a costume to match the character, they chose a costume to match the era, probably due to a small budget. In order to give the audience the impression that the events were in the 1930s the production used several clever, cost-effective devices. ...read more.

The characters themselves made the scenery changes as they walked on and off stage assisted by a maid dressed in 1930s costume. The maid helped the play to flow from one scene to another and kept up the mood of the play and the era. I found it very interesting to see the wide range of talent in the production. Some people who on the face of it had very small parts contributed greatly to the production. For example the maid who had a non-speaking part mimed her reactions to what was going on and was very powerful. On the other hand some other characters with main roles seemed to slip out of role at times. This was a difference I noticed from professional theatre productions. Another technical device much more evident in this amateur production than in professional equivalents was the prompt. She sat on a level with the front row of the audience and on the couple of occasions when she prompted, this was very obvious. ...read more.