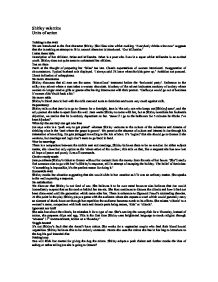 Shirley valentine Units of action Talking to the wall We are introduced to the first character Shirley. She likes wine whilst cooking. 'Everybody drinks wine now' suggests that she is making an attempt to fit in. second character is introduced. 'Our Millandra.' I miss them kids Description of her children. Brian and Millandra. Brian is a poet who lives in a squat whilst Millandra is an excited youth. Shirley does not quite seem to understand her children. Tea on time Panic at the thought of preparing her 'fellas' tea late. Classic expectations of women introduced. Exaggeration of circumstances. Typical husband role displayed. 'I always said I'd leave when the kids grew up.' Ambition not pursued. Direct indication of unhappiness. No more chocolates Shirley discusses that all men are the same. 'Marvellous' treatment before the 'horizontal party'. Reference to the milky tray advert where a man takes a woman chocolate. Mockery of the advert insinuates mockery of society where women no longer receive gifts or graces after having intercourse with their partner. 'Cadburys would go out of business if women didn't hold back a bit.' No more milk Shirley's friend Jane in bed with the milk man and turns to feminism and turns very much against milk. Dependency Shirley tells us that Jane is to go to Greece for a fortnight, Jane is 'the only one who keeps me [Shirley] sane', and the only person she talks to apart from the wall. Jane wants Shirley to come with her, but as Shirley considers her husbands objection, we realize that he is entirely dependant on her. 'Jesus if I go to the bathroom for 5 minutes he thinks I've been hijacked'. ...read more.

Shirley contemplates that it would have been preferable to have found her husband in bed with the milk man as opposed to fading out of love and out of existence. There was no truly disturbing event which brought the love to an end but a general area of 'nothingness' along the way where Joe turned into 'him' and Shirley turned into 'this', she objectifies herself making her inanimate and nameless, or 'another name on the missing persons list'. Meaningless Love She describes a state where 'I love you' has become a mere three words. When there is an absence of action supporting the words they may as wall fall to dust. Joe is another tragic example of someone who uses the words 'I love you' as a consolation for all wrong actions, a leeway to further mistreatments. Why don't I leave? She observes her opportunity to fulfil her dream, questions her toleration of a life she hates. She fears the life beyond 'the wall'. She has a naivety about Greece, like many of us, she fears the unknown. She faces her fears by degrading Greece to a substance used to cook chips and egg. Pretence She hits the alcohol. She imagines the sea, as if she were in the country 'where the grape is grown'. This is a cyclic reference to her previous stream of consciousness. Act One Scene Two Passport, tickets, money Shirley in an utter state of panic continuously reassures herself, she perceives the journey as an epiphany, 'this year Greece, next year...the world.' Gone to Greece back in two weeks Doubts about not telling Joe. She knows he would have convinced her otherwise however she still feels guilty. ...read more.

A dream come true represents her loss of belief in dreams as they are different in reality. Costas observes Shirley's fear of coming on a boat with him 'foak is foak, boat is boat.' The following morning Jane arrives to the hotel and profusely apologizes but insults Shirley in the mean time. 'I suppose you've just been sitting here talking to the wall haven't you' by which Shirley is enraged hence with her vigour towards Jane she meets Costas on the quay. Alive Shirley and Costas sail and swim in water 'maybe so deep it goes on forever'. Shirley exits being Shirley Bradshaw, and is reborn as she breaks her promise to Joe when she married him, and makes Costas break his promise to her by doing 'the most natural thing in the world'. I'm not going back After the occurrence with Costas Shirley apprehends that her absence at home would not 'damage anyone' or cause any 'real suffering'. She recognizes that from a distance it would seem tragic, a mother and wife who went on holiday and didn't return. She 'falls in love with the idea of living' rather than falling in love with Costas. 'Most of us die before we're dead'. Shirley turns around from the airport and leaves. Life worth living Shirley goes back to the taverna to get a job. She serves the Brits chips and egg. Shirley argues with Joe over the phone, he rightly presumes that she has had a romance in Greece 'the only romance I've had is with me self Joe'. The woman he wanted back didn't exist anymore. She asks for the same table to be put out to sea as she awaits joke's arrival. Words in preparation to say to him; 'I'm Shirley Valentine, would you like to join me for a drink?' ...read more.