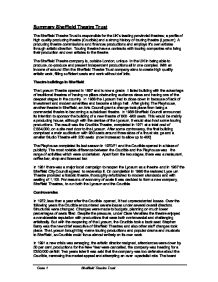 Summary Sheffield Theatre Trust The Sheffield Theatre Trust is responsible for the UK's leading provincial theatres; a profile of high quality producing theatre (Crucible) and a strong history of touring theatre (Lyceum). A producing theatre commissions and finances productions and employs it's own artistes through artistic direction. Touring theatre have a contracts with touring companies who bring their production and own artistes to the theatre. The Sheffield Theatre company is, outside London, unique in the UK in being able to produce, co-produce and present independent productions all in one complex. With an income of around �5m the Sheffield Theatre Trust company aims to create high quality artistic work, filling sufficient seats and work without deficits. Theatre buildings in Sheffield The Lyceum Theatre opened in 1897 and is now a grade II listed building with the advantage of traditional theatres of having no pillars obstructing audience views and having one of the deepest stages in the country. In 1968 the Lyceum had to close down in because of lack of investment and modern amenities and became a bingo hall. After giving The Playhouse, another theatre in Sheffield, an Arts Council grant a change took place from being a commercial theatre to becoming a subsidised theatre. In 1966 Sheffield Council announced its intention to sponsor the building of a new theatre of 800-900 seats. This would be mainly a producing house, although with the demise of the Lyceum, it would also host some touring productions. The result was the Crucible Theatre, completed in 1971 at a total cost of � 884,000, on a site next door to the Lyceum. ...read more.

A fundamental shift of thinking came in 1998/99 in that the artistic quality and financial prudence were no longer to be seen as competing forces. The autumn of 2000 was disappointing, but no major cuts were made; the resolve of the board to stick to its new strategy was severely tested. Structures Both theatres first had their own board. By 1995 it was decided that both theatres would come under one charitable body, the Sheffield Theatres Trust. It charitable objects were: * To promote, maintain, improve and advance education, particularly by the production of educational plays and the encouragement of the arts of drama, mime, dance, singing and music... * To receive, educate and train students in drama, dancing, music, and other arts, and to promote the recognition and encouragement of special merit in students..... The Lyceum Trust continues, but it employs no staff. It leases the building to Sheffield Theatres Trust using the money for future repairs and maintenance. As with most charitable organisations of any size, it is necessary to have a trading subsidiary company to undertake non-charitable subsidiary company to undertake non-charitable activities such as the sale of food and drinks and commercial sponsorship. This is the role of Offstage Ltd which is owned by Sheffield Theatres Trust. At the end of the year, Offstage undertakes a gift aid payment to transfer all its profits to Sheffield Theatres Trust. The board of Sheffield Theatres now operates in effect as one organisation, which overall responsibility for management of the whole complex. ...read more.

The profits of the restaurants, bars and gift shop form an important source of additional income. By the mid-1990's, Sheffield Theatres became increasingly successful in attracting sponsors for many Sheffield productions. The need for major upgrading of the Crucible building means that a new fundraising project, possibly for up to �10m, might soon be launched with a view to completion by 2004. Employees In 2000, Sheffield Theatres employed 161 staff on ongoing contracts. Issues for the early 2000s The principal challenge is the ongoing requirement to maintain and develop the quality of output on the three stages, whilst attracting sufficient revenue from a combination of grants and box office sales to make this possible. Building new audiences remained crucial. The new revenue grants from Yorkshire Arts meant that for the first time in many years the management could think about expanding the investment in productions. Charity Commissions guidance suggests that charities should have adequate reserves over and above their fixed assets to cover a reasonable period of expenditure (three months is often suggested). There was willingness to invest in higher quality in-house productions, but a higher quality of in-house productions can only succeed in the long term if it leads to higher levels of attendance. Sadly, due to a combination of apparently unrelated issues, attendances in 2000/01 were disappointing both for in-house and visiting productions. The key question which remained was whether or not, on a long-term basis, the output of the theatres could be translated into a level of scales at the box office that could give the financial stability which Sheffield Theatres so desperately needed. Case 1 Sheffield Theatre Trust ...read more.