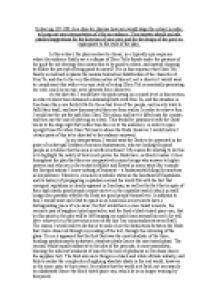 The Good Person of Szechwan, extract pg 105-108: As a director, discuss how you would stage the extract in order to bring out your interpretation of it for an audience. Your answer should include justified suggestions for the direction of your cast, and for the design of the piece as appropriate to the style of the play.

ï»¿Extract pg 105-108: As a director, discuss how you would stage the extract in order to bring out your interpretation of it for an audience. Your answer should include justified suggestions for the direction of your cast, and for the design of the piece as appropriate to the style of the play. In this extract, the play reaches its climax, in a typically epic sequence where the audience finally see a collapse of Shen Teh's façade under the pressure of her guilt for not obeying their instruction to be good to others, and instead choosing to follow the precept of being good to oneself. It is in this sequence that Shen Teh finally reveals and explains the reasons behind her falsification of the character of Shui Ta, and due to the very Brechtian nature of this act, as I a director I would want to complement this with a very epic style of acting (Shen Teh is essentially presenting her case, much as an epic actor presents their character). As the director, I would have the gods sitting on a raised level in this section, in order to show their distanced relationship both with Shui Ta, and the situation in Szechuan (they care fairly little for the actual lives of the people, and merely wish to fulfil their task), and how disconnected they are from reality. ...read more.

lower his head and drop his shoulders (almost as if he were being forced down by the pressure Shen Teh is feeling). As he then says 'Illustrious Ones, I have recognised you!' I would have him look back up, wide-eyed and speaking in an earnest tone and with Shen Teh's voice and posture. A few moments later, when Shen Teh reveals herself, I would have her only remove her mask, and not have Shui Ta 'rip(s) away his costume'. My reason for this is that I would not want Shui Ta to change back into Shen Teh (the reverse of which the audience has already seen in the Song of the Defencelessness of the Good and the Gods) ? rather I would want the inherent falsity of the character of Shui Ta to be made plain, and by allowing the gods and the audience to observe Shen Teh in the sharp, western attire of Shui Ta, it will highlight Shen Teh's artifice. This practice of allowing the audience to see past the theatricality of the play is one that is key to Brecht's theories about the Verfremdunseffekt, in which the audience should be kept at a distance from, or made strange to the action, in order to allow them to observe the plot and its message objectively. ...read more.

w**g will kneel before them ? raising his hands up as he says 'show your respect' ? then beckoning the others to join him on their knees. A few moments later in the Trio of the Vanishing Gods on Their Clouds, I would want the Gods, accompanied by a piano playing in the pentatonic scale (in which most typically oriental-style music is written), so sing the song at a pace that is slightly faster than appropriate to be dignified, ending on a discordant harmony that does not indicate that the song has actually finished (making the ending very abrupt). I would want to do this as in my view the Gods are eager to depart Szechuan (as they say ? 'all to long on earth we have lingered'), and in their haste they are essentially leaving matters entirely open ended and unfinished, which is why I would want the song to end in this way. For the last image of the extract, I would have the Gods lifted out of sight on their rope ladders, in order to highlight their haste and how alien Szechuan is to them (the action being reminiscent of people being air lifted or rescued from somewhere they have been stranded). As they disappear, the Player will emerge and pull the half curtain across the rest of the characters, concealing them, and whatever action that may have followed. ...read more.