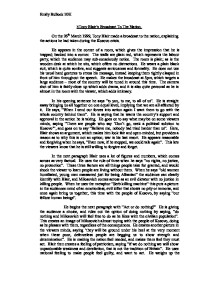 hTony Blair's Broadcast To The Nation. On the 26th March 1999, Tony Blair made a broadcast to the nation, explaining the actions he had taken during the Kosovo crisis. He appears in the corner of a room, which gives the impression that he is trapped; backed into a corner. The walls are plain red, which represents the labour party, which the audience may sub-consciously notice. The room is plain; as is the wooden desk at which he sits, which offers no distractions. He wears a plain black suit, which is quite sombre, and suggests seriousness and formality. He does not use his usual hand gestures to stress his message, instead keeping them tightly clasped in front of him throughout the speech. He makes the broadcast at 5pm, which targets a large audience - most of the country will be tuned in around this time. The camera shot of him is fairly close up which adds drama, and it is also quite personal as he is almost in the room with the viewer, which adds intimacy. ...read more.

When he uses the metaphor "Serb killing machine" this puts a picture in the audiences mind of an emotionless, evil killer that shows no pity or remorse, and once again bring us together, this time with the people of Kosovo, by saying "our fellow human beings". He begins the next paragraph with "Act or do nothing?" He is giving the audience a choice, and rules out the option of doing nothing by saying, "do nothing and Milosovich will feel free to do as he likes with the civilian population". This creates an image of Milosovich almost toying with the people of Kosovo, doing as he pleases with them, regardless of the consequences. He creates another picture in the viewers minds, saying 'they will be ground under his heel at the very moment when these poor, defenceless people are begging us to show strength and determination". He is making the nation feel needed, and makes them feel they must act. ...read more.

He is almost relying on the audience to see it through this war, which makes the audience feel responsible and a big part in serving justice. He uses the rule of three again when he says " for the sake of humanity and the future safety of our region and the World". These three are all things that the audience would care about, and would fight for if they had to. Blair then brings in religion when he says "they are in our thought and prayers tonight". This also makes him look concerned and caring, gaining the approval of the viewer. In the final paragraph Blair offers a contrast of images when he says, "barbarity cannot be allowed to defeat justice". Barbarity creates a feeling of cruelness and uncontrollable chaos, making Milosovich appear uncivilised, lawless and evil, while justice creates a feeling of a lawful, orderly and civilised society. This shows that Blair has the worlds best interests at heart, and that he knows what must be done. He concludes with "This is simply the right thing to do". This sentence shows that there is no other choice, and that action simply must be taken. Emily Bullock 10H ...read more.