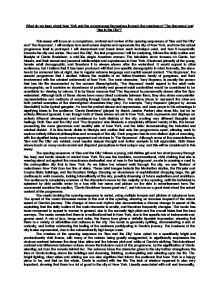 What do we learn about New York and the programmes themselves through the openings of 'The Sopranos' and 's*x in the City'?

What do we learn about New York and the programmes themselves through the openings of 'The Sopranos' and 's*x in the City'? This essay will focus on a comparison, contrast and review of the opening sequences of 's*x and the City' and 'The Sopranos'. I will analyse how each scene depicts and represents the city of New York, and how the actual programme itself is portrayed. I will deconstruct and break down each technique used, and how it is symbolic towards the city and series. 's*x and the City', the first programme I will be analysing, follows the daily routine and lifestyle of Carrie Bradshaw; a mid-30s single American woman. The television show focuses on Carrie, her friends, and their s****l and personal relationships and experiences in New York. It is aimed primarily at the young female adult demographic, and therefore it is always shown after the watershed. It would appeal to other audiences, but I believe that it has been produced with that one specific demographic in mind. Normally, the show has to be screened late at night, due to regular extreme language and explicit s****l content. 'The Sopranos', the second programme that I studied, follows the exploits of an Italian-American family of gangsters, and their involvement with the criminal underworld of New York. The main character, Tony Soprano, is usually the person that has his life documented by the camera. Stereotypically, 'The Sopranos' would appeal to the adult male demographic, as it contains an abundance of profanity and general adult content that would be considered to be unsuitable for viewing by minors. It is for these reasons that 'The Sopranos' is permanently shown after the 9pm watershed. Although both of these shows have many direct contrasts between them, they also share many similar representations and methods of encoding through iconic signifiers. The actors chose to represent the roles are both perfect examples of the stereotypical characters they play. ...read more.

The Brooklyn Bridge is again shown for these reasons, but also shows the journey that Carrie is on. We can infer from the way that the landmarks are encoded, that this journey is not just a physical one from A to B, but a spiritual passage, and a journey of self discovery. The Manhattan skyline visible at the very start of the opening sequence shows how cosmopolitan and mixed Carrie's life is, with the highs and lows that every journey has. The camerawork is very unusual in the opening sequence of 's*x and the City', with a multitude of diverse camera angles and focus. There are many close-ups of the main character, allowing the audience to see he face, and develop some insight into her thoughts, emotions and feelings, through the complex expressions that adorn her face. It is by this that the producers of the programme allow the audience to realise that the focus is Carrie and her personal relationships, by alluring them into feeling a sense of empathy towards the main character. There are also numerous long shots of buildings, which form the background of Manhattan, showing the location and setting of the programme. The handheld camera effect gives the feel that we (the audience) are in control over the journey, and the tracking of moving vehicles demonstrates the chaotic lifestyle and routine that Carrie follows. It also gives the sense of a chase, with us following not only the main character, but all the events happening around her. This helps the audience to feel more immersed in the programme, and in a subtle way demonstrates the sheer confusion in Carrie's life. A zoom lens is used to refocus on Carrie later on in the opening, especially at the point where she is soaked by the bus. This gives the impression to the viewer that they have in common and can associate themselves with the character. ...read more.

While passing a church and graveyard on his travels, Tony is reminded of his religion and tradition, and possibly even friends he has lost due to their activity in the criminal underworld. The main thing noticeable on the journey is the class divide between the two areas of New York that Tony passes. The first, Manhattan, is luxurious, expensive and glamorous, whereas the second, the New Jersey suburbs, is the direct opposite; unpleasant, cheap and dull. As Tony passes the first district, his glance lets the audience know that secretly, he desires the power, wealth and glamour of Manhattan and mainstream, stereotypical New York. There are many different and unique uses of the camera in the opening of 'The Sopranos', with the camera moving independently for most of the journey. This helps the audience feel like they are actually part of the journey, and lets the viewers feel as if they are actually a part of the action. Many close-ups of Tony are used, all of which reveal parts of his body one at a time; like a sort of jigsaw puzzle. This helps preserve the mysterious atmosphere of Tony and his lifestyle. Tracking is also used to follow an aeroplane in the sky, further showing Tony's ambition to travel and to acquire power. Tracking is additionally used to follow Tony's car from a third person perspective, allowing the audience to fully establish his location in suburban New York. Almost everything on the journey is observed from the perspective of a passenger, allowing the viewer to totally involve and immerse themselves in the programme. Lots of scenes are cut between the journey to allow the audience to see as much of New York as possible, to help the viewer establish a fair representation on the city. Overall, the opening sequence of 'The Sopranos' conveys a message of mystery to the audience, showing Tony's position in the criminal underworld, and helping to explain his purpose. We learn about the programme itself that it focuses on the life of an Italian-American gangster family, and that New York is primarily a man's world. ...read more.