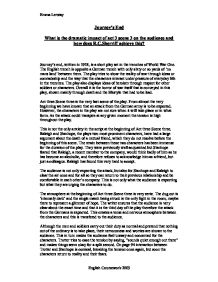 What is the dramatic impact of act 3 scene 3 on the audience and how does R.C.Sherriff achieve this?

Journey's End What is the dramatic impact of act 3 scene 3 on the audience and how does R.C.Sherriff achieve this? Journey's end, written in 1918, is a short play set in the trenches of World War One. The English trench is opposite a German trench with only sixty or so yards of 'no mans land' between them. The play tries to show the reality of war through ideas or comradeship and the way that the characters interact under pressure of everyday life in the trenches. The play also displays ideas of heroism through respect for other soldiers or characters. Overall it is the horror of war itself that is conveyed in this play, shown mainly through death and the lifestyle that had to be lead. Act three Scene three is the very last scene of the play. From almost the very beginning we have known that an attack from the German army is to be expected. However, the characters in the play are not sure when it will take place or in what form. As the attack could transpire at any given moment the tension is high throughout the play. This is not the only anxiety in the script at the beginning of Act three Scene three. Raleigh and Stanhope, the plays two most prominent characters, have had a large argument about the death of a mutual friend, which they do not resolve before the beginning of this scene. ...read more.

There seems to be a lot of commotion, this makes the audience feel uneasy. Eventually the tension is broken in the scene by Mason who wishes to go into the trenches with Hibbert as he is not familiar with the surroundings. This gives Hibbert no option and is forced to leave. The private soldier that comes down from the trench above is out of breath and excited. He informs Stanhope about the attack and who has been hit. The soldier has rushed to the dug out, showing that there is chaos outside, emphasised by the repeated thuds, crashes of bombs and gunfire. The soldier is obviously reluctant to rejoin the fighting as he makes his way up the steps to the trenches slower than when he came down them. As the soldier leaves the sergeant major enters, he too being very out of breath. The comings and goings of so many characters, causes a build in tension in the small dug out, in turn making the audience feel excited and nervous. He informs Stanhope that only Corporal Ross has been hit and that the attack is very much in full flow. The pace of their conversation is very fast, displaying to the audience a definite sense of urgency. It also shows the nervousness of the two characters. Stanhope checks that there has only been one injury so far, showing his concern and comradeship between fellow officers and men. ...read more.

They want to know why Trotter requested Stanhope, how the battle ends and they wish to know who survives and who dies. I think the end of the play is very successful. It has a definite ending yet leaves the audience asking questions, which they are eager to know the answers to. It also leaves the ending quite open. This allows the audience's minds to wander, permitting the, to make the story end their own. I think that most of all R.C.Sherriff was trying to convey that war is not just fighting for your country. That it is about working successfully with others in one big machine. If the parts of that machine do not work together then it will break down. He also wanted to portray the absolute horror and injustice that war has to offer. He does this extremely successfully as he makes the audience feel encapsulated in the whole experience of war. Even though he is telling them what it is like, he leaves freedom for them to develop their own view on it. Overall, I think that R.C.Sherriff was trying to say that the human side of war is futile. Nobody wins, a lot of people die without accomplishing a great deal, and from whatever angle you chose to look at it, the whole idea is pointless, causing more pain than is necessary. Should all this commotion be vital, just to gain another thirty metres, which will most probably be return to the rightful owner in due time anyway? Emma Lerway English Coursework 2003 ...read more.