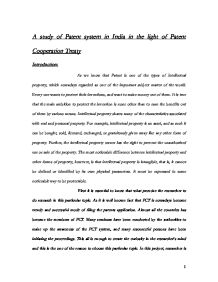 A study of Patent system in India in the light of Patent Cooperation Treaty.

A study of Patent system in India in the light of Patent Cooperation Treaty Introduction: As we know that Patent is one of the types of Intellectual property, which nowadays regarded as one of the important subject matter of the world. Every one wants to protect their inventions, and want to make money out of them. It is true that the main ambition to protect the invention is none other than to earn the benefits out of them by various means. Intellectual property shares many of the characteristics associated with real and personal property. For example, intellectual property is an asset, and as such it can be bought, sold, licensed, exchanged, or gratuitously given away like any other form of property. Further, the intellectual property owner has the right to prevent the unauthorized use or sale of the property. The most noticeable difference between intellectual property and other forms of property, however, is that intellectual property is intangible, that is, it cannot be defined or identified by its own physical parameters. It must be expressed in some noticeable way to be protectable. First it is essential to know that what provoke the researcher to do research in this particular topic. As it is well known fact that PCT is nowadays become trendy and successful mode of filing the patents application. Almost all the countries has become the members of PCT. Many seminars have been conducted by the authorities to make up the awareness of the PCT system, and many resourceful persons have been initiating the proceedings. This all is enough to create the curiosity in the researcher's mind and this is the one of the reason to choose this particular topic. In this project, researcher is interested to do research in the context of Indian scenario. As every body knows that, India is also one of the members of PCT and it is important to know that whether this treaty is beneficial to our country. ...read more.

country other than the home country, then the inventor has to file the different patent applications for each country for which patent protection has been sought. The applicant has to do a hectic job and too many expenses, if he wants to file the patent application through traditional systems. The applicant has to bear the expenses of the Attorney of other country, the translation fees, and ofcourse the payment of fees to the patent office. If we assume that, the applicant has the capacity to do all these work without tension and worry, but the question arises regarding the granting of the patent. Meaning there by, after doing all hectic work, it is not sure that he will get the patent protection because it totally depends on the country to country. So if the applicant's invention is not new compared with the state of the art, then that particular country has the power to refuse to grant the patent, and applicant has loss all the sweat money and every thing (precious time, handle the cumbersome procedures etc.) been gone into vain. Therefore there is no guarantee of granting the patent, it's wholly and solely depends on the patent office desertion. Inorder to come out with the hectic and cumbersome procedure of the traditional system of filing, PCT came into force. At the time of formation, there were only 18 contracting states has become the member of the treaty, but now there are 123 contracting states existed which showed the tremendous popularity of the treaty. Now after the incorporation of PCT, traditional system has become almost obsolete and now every country has to file the patent application through the PCT because of following reasons9; * No multiple formalities needed, meaning there by, one set of formality requirements. * International Search: This is one of the major facilities provided by the PCT. In traditional system, there were no concept of this type of search, that is, in every country; searches took place which needs lot of resources and time. ...read more.

But, recently i.e. as of January 1,2004, the PCT-EASY software will be included as part of the PCT-SAFE (Secured Application Filed Electronically) functionality which will continue to exist, this new software will allow for the filing of international applications electronically21. This all the developments only done because of only sole purpose that is to provide easy procedure to the applicants which helps them to file the application easily and without any difficulty. But, according to the researcher's opinion, this all facilities or the development is beneficial to the Patent Attorney because in most of the cases the applicant will transfer their responsibility on the shoulder of the Attorneys. But, the applicants who do not have enough money to pay the Attorneys fees, they can utilize this type of facilities and file the application by their own. Therefore, the PCT system is quite a bit complex but not too much and if some complexity will exist then it will be compensated by the various advantages of the PCT. Various Statistics International Search Authority 1 http://usinfo.state.gov/products/pubs/intelprp/ 'visited on 10-05-2004 2 ibid 3 ibid 4 ibid 5 http://www.singhania.com/lawguide/preface20c.htm, visited on 02-05-2004 6 It is doubtful whether the Paris convention will ever play big role after WTO/TRIPS. Actually all substantive articles are now incorporated into TRIPS. 7 As of December 2000, PCT has 108 Contracting states, now it has 123 contracting states. 8 Markuss Nolff, TRIPS,PCT,Global Patent Procurement, Kluwer law International, Netherlands, 2001,Pp.45 9 Manual prepared by the International Bureau of WIPO at the time of seminar which held on 25-26 march, 2004 at Bangalore. 10 http://www.wipo.int/pct/en/basic_facts/basic_facts.pdf 'visited on 15-05-04' 11 ibid 12 http://www.wipo.int/pct/en/basic_facts/basic_facts.pdf 'visited on 15-05-04' 13 http://www.las.ac.in/currsci/sep102003/570.pdf ' visited on 16-05-2004 14 http://www.wipo/int/edocs/prdocs/en/2003/wipo_pr_2003_338.html 'visited on 20-05-2004(Press release on February 18 2003) 15 ibid 16 http://www.wipo.int/edocs/prdocs/en/2001/wipo_upd_2001_155.html 'visited on 20-05-2004 17 http://www.wipo/int/edocs/prdocs/en/2003/wipo_pr_2003_338.html 'visited on 20-05-2004(Press release on February 18 2003) 18 http://www.wipo/int/edocs/prdocs/en/2003/wipo_pr_2003_350.html 'visited on 20-05-2004 19 http://www.ipo.uc.edu/index.cfm?fuseaction=overview.faq 'visited on 22-05-2004' 20 manual prepared by the WIPO, at the time of national seminar on PCT,at Bangalore on March 25-26, 2004, p.66 21 ibid, p.67 1 ...read more.