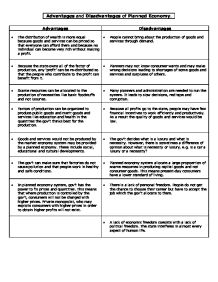 Advantages and Disadvantages of Planned Economy.

Advantages and Disadvantages of Planned Economy. Advantages Disadvantages * The distribution of wealth is more equal because goods and services can be priced so that everyone can afford them and because no individual can become very rich without making a profit. * People cannot bring about the production of goods and services through demand. * Because the state owns all of the factor of production, any 'profit' can be re-distributed so that the people who contribute to the profit can benefit from it. ...read more.

This means present-day consumers have a lower standard of living. * In planned economy system, gov't has the power to fix prices and quantities. This means that where production is controlled by the gov't, consumers will not be charged with higher prices. Private monopolist, who may exploits consumers with higher prices in order to obtain higher profits will not exist. * There is a lack of personal freedom. People do not get the chance to choose their career but have to accept the job which the gov't allocate to them. * A lack of economic freedom coexists with a lack of political freedom. The state interferes in almost every aspect of human life. ...read more.