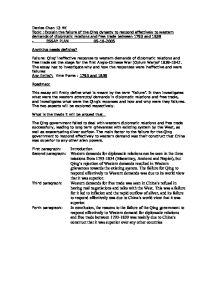 CHINA: Explain the failure of the Qing dynasty to respond effectively to western demands of diplomatic relations and free trade between 1793 and 1839- ESSAY PLAN

The two aspects will be explored respectively. What is the thesis it will be argued that... The Qing government failed to deal with western diplomatic relations and free trade successfully, leading to long term grievances with existing system by the West, as well as exacerbating silver outflow. The main factor to the failure for the Qing government to respond effectively to western demand was their construct that China was superior to any other alien powers. ...read more.

Third paragraph: Western demands for free trade was seen in China's refusal in having real negotiations and talks with the West. This was a failure for it led to inflation and the rapid outflow of silver, and its failure to respond effectively was due to China's world view that it was superior. Forth paragraph: In conclusion, the reasons to the failure of the Qing government to respond effectively to Western demand for diplomatic relations and free trade between 1793-1839 was mainly due to China's construct that it was superior over any other countries ...read more.