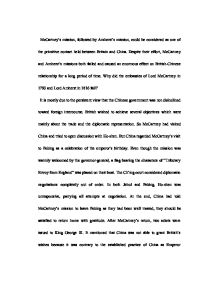 Why did the embassies of Lord McCartney in 1793 and Lord Amherst in 1816 fail?

McCartney's mission, followed by Amherst's mission, could be considered as one of the primitive contact held between Britain and China. Despite their effort, McCartney and Amherst's missions both failed and caused an enormous effect on British-Chinese relationship for a long period of time. Why did the embassies of Lord McCartney in 1793 and Lord Amherst in 1816 fail? It is mostly due to the persistent view that the Chinese government was not disinclined toward foreign intercourse. British wished to achieve several objectives which were mainly about the trade and the diplomatic representation. So McCartney had visited China and tried to open discussion with Ho-shen. But China regarded McCartney's visit to Peking as a celebration of the emperor's birthday. Even though the mission was warmly welcomed by the governor-general, a flag bearing the characters of "Tributary Envoy from England" was placed on their boat. The Ch'ing court considered diplomatic negotiations completely out of order. ...read more.

They rather thought the opening of the trade would bring profit only to the partner. They also knew that building up a relation with Britain would only collapse the established practice of China. So China accepted McCartney with the utmost politeness, treated with utmost hospitality, watched with utmost vigilance and dismissed with the utmost civility but never let them speak a word about the diplomatic issues. Both McCartney and Amherst had done their best but failed. However, we cannot miss the fact that there was a lack of understanding of the Chinese culture in Britain. This also has contributed to the British failure. Kowtow was one of the most significant cultures they had to face. Kowtow is to kneel three times and lie down nine times before the Emperor to show him respect. Both McCartney and Amherst did not mind doing so, but they considered this action as an insult to King George ? ...read more.

As a result, English embassy was expelled and its "tribute" was rejected. These factors could be the evidences of how British were unaware of Chinese cultures and China itself. "When in Rome, do as the Romans do" - this spirit was missing from the Britain. If British knew to esteem China a little more, if they at least knew how important dynasty is for China, there could have been a chance of negotiation. But their mission was not a complete failure. They succeeded in collecting valuable information. China's scientific and medical knowledge was actually in a low status, their army quality is declining, the poverty was prominent in the society and moreover the dynasty was in danger of collapsing. From this information, the British's next step was to change their situation by using military forces. This soon led to the breakdown of the Canton system and it was the beginning of the long-decayed clash between Britain and China and also the beginning of the British's revenge. Therefore, McCartney and Amherst's failure converted into a big success later in the future. ...read more.