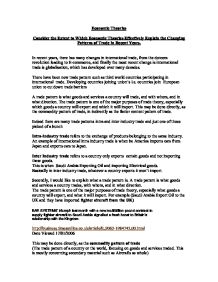 Consider the Extent to Which Economic Theories Effectively Explain the Changing Patterns of Trade in Recent Years. In recent years, there has many changes in international trade,

Economic Theories Consider the Extent to Which Economic Theories Effectively Explain the Changing Patterns of Trade in Recent Years. In recent years, there has many changes in international trade, from the dotcom revolution leading to E-commerce, and finally the most recent change is international trade is globalisation, which has developed over many decades. There have been new trade pattern such as third world countries participating in international trade. Developing countries joining union's i.e. countries join European union to cut down trade barriers A trade pattern is what goods and services a country will trade, and with whom, and in what direction. The trade pattern is one of the major purposes of trade theory, especially which goods a country will export and which it will import. This may be done directly, as the commodity pattern of trade, in indirectly as the factor content pattern of trade. Indeed there are many trade patterns intra and inter industry trade and just one of those picked of a bunch Intra-industry trade refers to the exchange of products belonging to the same industry. An example of international intra industry trade is when be America imports cars from Japan and exports cars to Japan. Inter Industry trade refers to a country only exports certain goods and not importing these goods. This is when Saudi Arabia Exporting Oil and importing Electrical goods. Basically in inter industry trade, whatever a country exports it won't import. Secondly, I would like to explain what a trade pattern is. A trade pattern is what goods and services a country trades, with whom, and in what direction. ...read more.

In my thoughts I generally think that Ricardos Theory of Comparative advantage relates and explains Globalistion indirectly this is because it talks about speclisation now if you look at it carefully and think of all the fresh fruit the we eat. It is produced in countries such as Morocco, now this country specilises in the production of raw goods such as fruits in exchange for money to build a strong currency. The reason I say Ricardos Theory of Comparative advantage relates and explains Globalistion indirectly is because its not about the country anymore its about the company, now if a country charges a lot of tax a company will set up elsewhere hence in economic terms and conditions a company rules. is it any wonder USA are always fining Bill Gates as they fell thereanted by his economic power. One of the major concerns in comparative advanatge is that once all resources finish a war or conflict will occur, for example the recent case in ukraine where they are cutting gas supplies to Russia because of Absoloute resource constraint. Ukraine cut Russian daily gas transit by 60 Mln cubic meters - minister http://www.interfax.ru/e/B/0/28.html?id_issue=11451874 Date viewed 20/01/2006 Another example could be the use of raw materials, such as Gas (see above headline) Regarding Oil governments becoming tough and conflicts such as the petrol protest/strikes. In 1817, David Ricardo looked at Adam Smith's theory and suggested, "there may still be global efficiency gains from trade if a country specializes in those products that it can produce more efficiently than other products - regardless of whether other countries can produce those same products even more efficiently" . ...read more.

Another example of mercantilism in action is the foreign owned liquefied natural gas companies that are going into operation in Baja California. Even though foreign investment in oil and gas is technically illegal in Mexico, these companies apparently are obtaining all needed approvals and permits from the various Mexican agencies. Mercantilism explains the changing pattern of trade in china effectively because many organisations are state owned or are becoming state owned. However, mercantilism does not explain the international trade patterns directly as different countries are in different situations, some countries are in the same strategic group when it comes to international trade such as America and England. Mercantilism relates to inter industry trade because exports are viewed as desirable and imports as undesirable unless they lead to even greater exports. To conclude I feel the theorist have made some excellent predictions in general, however not all theories give direct effective explanations of the changing pattern of trade i.e. globalisation. The above-mentioned theories do correctly explain directly what has happened in the past, but all theories that I have mentioned above explain indirectly the recent changing trade pattern i.e. globalisation. Throughout analysing theories, I have discovered that there will always be a loophole in the theories directly or in directly relating to the changing pattern of trade i.e. globalisation. Through the loophole, some theories effectively explain changing pattern in trade in recent years but not directly and not pinpoint hence creating contradictions leading to inaccurate explanations of Trade patterns. I feel by combing theory of comparative advantage, Heckscher-Ohlin model they explain the changing patterns of trade in recent years. ...read more.