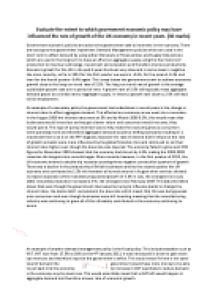 Evaluate the extent to which government economic policy may have influenced the rate of growth of the UK economy in recent years.

﻿Evaluate the extent to which government economic policy may have influenced the rate of growth of the UK economy in recent years. (30 marks) Government economic policies are actions the government take to intervene in the economy. There are two types the government implement: Demand Management policies which are used in the short term to affect demand by using either Monetary or Fiscal policies and Supply Side policies which are used in the long term to have an effect on aggregate supply using the four factors of production to improve technology, investment and education and therefore improve productivity. Economic growth for the UK in the past 5 years has been very slow and in some cases in negative like more recently, so far in 2012 for the first quarter we were in -0.4%, for the second -0.3% and then for the fourth quarter -0.4% again. This is way below the governments aim to achieve economic growth close to the long run trend rate of 2.5%. ...read more.

The economy failed to grow and ONS figures for November 2009 showed that the economy had shrunk by 4.9% making the 2008-2009 recession the longest since records began. More recently however, in the first quarter of 2012, the UK economy entered a double-dip recession posting three negative consecutive quarters of growth. There was a decline in the productivity of British businesses and by the second quarter the UK economy and contracted by 1.2% this however all turned around in August when services showed increased expansion while manufacturing posted growth of 3.2% in July, the strongest since July 2002. Industrial production increased 2.9 %, the strongest since February 1987. This data therefore shows that even though the government intervened by trying to influence banks to change the interest rates, the banks didn?t complement the base rate which meant that this was being passed onto consumers and even though businesses were still investing meaning that the manufacturing industry was continuing to grow all of this ultimately contributed to the economy continuing to shrink. ...read more.

A rise in employment will lead to more incomes and therefore more consumption. Another example is them spending on schemes to help economic growth such as the business link scheme. This was introduced many years ago in order to help businesses set up more quickly and effectively. This type of introduced policy will have increased productivity by introducing more jobs in the labour market and therefore a higher level of economic growth. All three of the government policies mentioned were put in place to influence the economy to grow through various ways. The first one was affected by the lack of confidence the banks had to reduce the rate due to the financial crisis resulting in the economy contracting. The second policy of increasing taxation could have a rebound effect of consumers purchasing less as the prices will have rose which will therefore mean that the deficit wouldn?t have been improved and the government can?t reinvest this money into the economy. The third policy is by far the more beneficial for economic growth as the government are increasing their spending which will encourage more spending within the economy. ...read more.