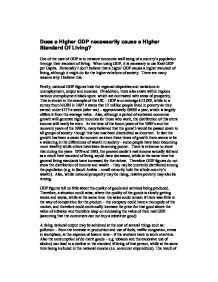 Does a Higher GDP necessarily cause a Higher Standard Of Living?

Does a Higher GDP necessarily cause a Higher Standard Of Living? One of the uses of GDP is to measure economic well being of a country's population through their standard of living. When using GDP, it is necessary to use Real GDP per Capita. Personally I don't believe that a higher GDP causes a higher standard of living, although it might do for the higher echelons of society. There are many reasons why I believe this: Firstly, national GDP figures hide the regional disparities and variations in unemployment, output and incomes. IN addition, there also exists within regions various unemployment black spots which are contrasted with areas of prosperity. This is shown in the example of the UK - GDP is on average �15,000, while in a survey from MORI in 1997 it states that 12 million people lived in poverty as they earned under �175 a week (after tax) ...read more.

There is evidence to show that during the years 1979 and 1993, the poorest decile's real income actually fell and as a result their standard of living would have decreased, while at the same time the general living standards have increased for the richest. Therefore GDP figures do not show the distribution of income and wealth - they nay be unevenly distributed among the population (e.g. in Saudi Arabia - small minority hold the whole country's wealth). Also, whilst national prosperity may be rising, relative poverty may also be rinsing. GDP figures tell us little about the quality of goods and services being produced. Therefore, a situation could arise, where the quality of the goods is slowly getting worse and worse, while at the same time the sales could remain if there was little ...read more.

consumer expenditure). The result of these goods is that they can create negative externality effects which constitute a reduction on standards of living. Therefore in conclusion, GDP is not a good way to measure standard of living, and there are a number of better ways which can be used - e.g. the crime rate of a country/region, the suicide rate, divorce rate, social welfare statistics - e.g. number of patients per doctor, infant mortality rates, average calorie intake, average education attainment at different age levels etc.. and also the amount of pollution ( although this, like other negative externalities in the economy are very difficult to put a monetary value on, Therefore, a higher GDP does not necessarily cause a higher of living. ...read more.