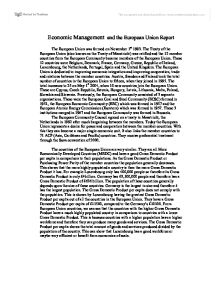 Economic Management and the European Union

Economic growth can still be achieved by higher-priced British goods. Resources and labour as well as capital need to be fully employed and used efficiently. This will lead to firms producing more goods that are generally of better quality. Resources are scarce so the resources of land labour and capital need to increase. Nationalized industries such as water and gas industries are natural monopolies and need to spend a lot of money on pipes, etc. to provide a lower average cost to their customers. Monopolies benefit from economies of scale and therefore the average cost of production decreases, lowering prices. Monopolies can be a good thing for any economy. Inflation is higher because of rising costs to produce goods. Wages are higher and therefore prices of commodities have increased due to this. The demand of higher wages would also mean that the productivity of workers would have to increase. This cost-push inflation can only be prevented by decreasing wages, however this is uneconomical as the cost of living is high. The increased cost of living is high because of higher prices on goods and services. So there is a circular flow of money which is good for the economy and encourages economic growth. The high value of the pound shows that the economy is in a great state for us. However, it is correct when you say that foreign will not buy our goods or come to this country but making the pound weaker is not such a good idea as we would be worse of. ...read more.