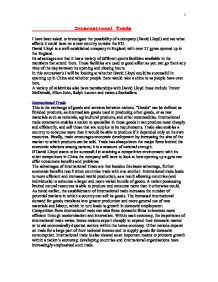 International Trade - I have been asked to investigate the possibility of a company (David Lloyd) and see what affects it could have on a new country outside the EU.

International Trade I have been asked to investigate the possibility of a company (David Lloyd) and see what affects it could have on a new country outside the EU. David Lloyd is a well-established company in England with over 27 gyms opened up in the England. Its advantages are that it has a variety of different sports facilities available to the members that attend there. These facilities are used to good affect as you can go there any time of the day between its opening and closing hours. In this coursework I will be looking at whether David Lloyd could be successful in opening up in China and whether people there would take a shine to as people have over here. A variety of celebrities also have memberships with David Lloyd these include Trevor McDonald, Elton John, Ralph Lauren and various footballers. International Trade This is the exchange of goods and services between nations. "Goods" can be defined as finished products, as intermediate goods used in producing other goods, or as raw materials such as minerals, agricultural products, and other commodities. International trade commerce enables a nation to specialize in those goods it can produce most cheaply and efficiently, and sell those that are surplus to its requirements. Trade also enables a country to consume more than it would be able to produce if it depended only on its own resources. Finally, trade encourages economic development by increasing the size of the market to which products can be sold. Trade has always been the major force behind the economic relations among nations; it is a measure of national strength. If David Lloyd wants to be successful in attaining a competitive environment with its other competitors in China the company will have to look at how opening up a gym can offer consumers benefits and problems. The advantages of International Trade are that besides this basic advantage, further economic benefits result when countries trade with one another. ...read more.

Although not all the staff that Lloyd hired would be able to speak every language that people throughout China speak. So David Lloyd could employ staff who speak a variety of languages and they must be able to speak Mandarin which is the official language of China and any other language spoken by a staff member would be helpful as it could be all that easier to overcome customers who don't speak Mandarin. Lloyd would also have to ensure that they adapt to the surroundings of China and the infrastructure that the country has. The company would have to ensure that its club is situated in the right place and is easily accessible for the Chinese people. This will make travel to and from David Lloyd's 'China' much easier. David Lloyd would also have to adapt to the currency that China has and Lloyd would have to adapt its prices depending on currency and labour costs, as labour costs may be cheaper then the costs of other countries such as the UK. All this would be considered by Lloyd's in order to adapt to the countries needs and for the company to settle down fairly quick and get on with its business. Intermediaries Intermediaries are the middle people that represent the company. The intermediaries play a role in the amount of people/customers a business such as Lloyds receives. The intermediaries will be to a great resource to David Lloyds as when the company tries to open up and set up its business. The company will have no links other than the ones that they knew before. Also as David Lloyds have no contacts in China and by the company using intermediaries David Lloyds can easily get customers and this will be to an advantage to them because the intermediaries that are used are very experienced and are good at doing there jobs. The intermediaries' main job is to bring about new customers to join David Lloyd's and as more and more customers come in and join Lloyd's the company will reap in the benefits. ...read more.

for the company Threats David Lloyds will have to ensure that its machinery is safe and doesn't hurt and possible user and regular safety checks on the clubs facilities will have to be taken out. Personal opinion on whether David Lloyds will be successful if opened up in China From the following SWOT analysis I have just done in my opinion David Lloyd would be successful, as David Lloyds has already decided to open up a new branch in Belgium and has another one opening up in Oxford. And the continuing growth of the business will be of great help to the company and as David Lloyd's opens up in China it will create a new market in which Lloyd's can immerse itself in as the Asian market is still to be broken by Lloyds as they have never opened up one their before. The reason for David Lloyd's being successful is because it is already a well renound company and has established itself as a big competitor when compared to other gyms in the UK and it has opened up 55 clubs and it has over 285,000 members and this is why it is the UK's number one health and fitness club. If David Lloyd continue to grow and opens up in China it will be a great success as they have all the necessary resources available to them both financially and in terms of facilities and managing directors. Lloyds will offer a wealth of expertise from fitness specialists to tennis coaches. I have personally seen the facilities it offers as I have a branch nearby where I live and the facilities they have are second to none. Also Lloyds also has a personal bar in which people can just relax and this will be good in China as this means families can join and this will create more customers to join Lloyds. Also as David Lloyd does here it will create a good friendly social environment where people can create new friends. ...read more.