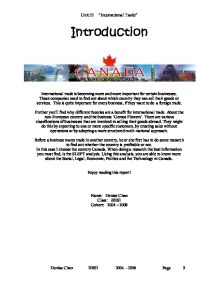 International trade - In this case I choose the country Canada. When doing a research the best information you must find, is the SLEPT analysis. Using this analysis, you are able to know more about the Social, Legal, Economic, Politics and the Technology

Introduction International trade is becoming more and more important for certain businesses. Those companies need to find out about which country they can sell their goods or services. This is quite important for every business, if they want to do a foreign trade. Further you'll find why different theories are a benefit for international trade. About the non-European country and the business 'Gemos Flowers'. There are various classifications of businesses that are involved in selling their goods abroad. They might do this by exporting to one or more specific customers, by creating sales without operations or by adopting a more structured multi-national approach. Before a business wants trade in another country, he or she first has to do some research to find out whether the country is profitable or not. In this case I choose the country Canada. When doing a research the best information you must find, is the SLEPT analysis. Using this analysis, you are able to know more about the Social, Legal, Economic, Politics and the Technology in Canada. Enjoy reading this report! Name: Denise Chan Class: 2IBS1 Cohort: 2004 - 2008 E1. A detailed explanation of how international trade leads to the benefits and costs identified using relevant theories Theory of David Ricardo David Ricardo was born in 1772 at London, England. He was a British political economist and one of the most influential of the classical economist. He was also a successful businessman, financier and speculator, and he was quite rich. Ricardo developed two key theories that are still important in the economic courses today. Those are: * Distribution theory * International trade theory (comparative advantage) Distribution theory With his partner Malthus, Ricardo was very concerned about the impact that increased populations would have on the economy. He argued that when more people and more land would have to be cultivated. However, the return from this land wouldn't be constant the same. ...read more.

Canada is one of the only developed country nations that exports energy products. They are also the world's highest per capita consumer of energy. Cheap energy has enabled the creation to several industries, just like large aluminum industries. Historically the Western Canada is one of the world's richest sources of energy. The two industrial countries, Southern Ontario and Quebec has fewer native sources of power. In 1988 Canada promised the United States that they will never charge the US more energy than the fellow Canadians (Canada-United States Free Trade Agreement). Canada also exports industrial goods and materials and machinery and equipment. Comparing with 2001 till 2005 the industrial goods and materials have increased a lot. Barriers The import tariffs on forest products have been reduced during the last trade negotiations. The Canadians reduce their import tariffs on forest products globally, this will continue as a priority under the 'Doha round of World Trade Organization negotiations'. In many export markets tariffs don't represents a major barrier to trade development. With the decrease in the tariff rates, it has increased the non-tariff barriers (NTB's). Non-tariff barriers (NTB's) or technical barriers cause for exporters many problems, when they are looking for a new market for their products. These barriers can be in the form of regulations, testing, standards and certification procedures. The WTO Agreement wants to ensure, with these barriers, not to create unnecessary obstacles. NTB's are government's policies and it's not the same as the tariffs, which restrict international trade. Examples that may have impact on the different industries are: - discriminatory government procurement practices - import quotas - technical and scientific barriers - environmental labeling - codes and standards - recycling content policies --> At the enclosure you'll find: - Merchandise Trade of Canada (monthly) at page ..... - Imports of goods on a balance-of-payment basis (per product) at page.... - Exports of goods on a balance-of-payment basis (per product) ...read more.

Europe said that, after the USA, Canada is the most important partner. If Europe continues to move to a powerful and influential unity, the importance to Canada will also increase. This also includes the economic area that has been expanding the last couple years. Some increases in our exports are in the high value-added sectors of the Canadian economy, just like the information and communication technology, life sciences and the transportation industries. Trading with other countries gives our business an international 'reach' into the global economy (including the NAFTA market). But it's also a benefit that trading with foreign countries, it will improve the managerial, marketing and technological capabilities of our businesses. Trade also creates jobs indirectly. It allows firms to obtain inputs to production that are cheaper or has a higher quality. For example; imports of high-tech equipment have helped a lot of U.S. businesses to reduce their costs, improve the productivity and decreased the competitiveness in the world markets. An advantage for both countries that trade with each other, consumers will have a better variety and better prices for the goods and services. The savings that the consumers have is moreover enjoyable; they have the availability to pay a low-cost goods or services with an high quality. E6. A clear presentation of the outcomes of your investigation including reference to the sources of information you have used Please check the PowerPoint presentation in the following diskette. C1. Reasoned judgement as to whether this business is actively involved in trading International trade is becoming more and more important to many countries and businesses. Gemos BV is actively involved in the trade world. They don't produce the flowers themselves, so it makes them a trade company. C2. A justified recommendation as to whether the business should trade in the identified market Resources * wikipedia * http://tpc-ptc.ic.gc.ca/epic/internet/intpc-ptc.nsf/en/Home * http://www.dfait-maeci.gc.ca/canada-europa/netherlands/can_nether-en.asp * http://www.statcan.ca/start.html * http://www.fedex.com/us/international/irc/profiles/irc_ca_profile.html?gtmcc= * http://www.fita.org/countries/cadre_9.html * http://canada.softlandings.com/canadian-economy.php * http://www.cia.gov/cia/publications/factbook/geos/ca.html#Intro * http://www.canadianeconomy.gc.ca/english/economy/index.cfm * http://atlas.gc.ca/site/english * http://www.fin.gc.ca/serialse/2005/econbr-e.html * and all the small information's are from www.google.com ?? ?? ?? ?? Unit 21 "International Trade" 3 Denise Chan 2IBS1 2004 - 2008 Page ...read more.