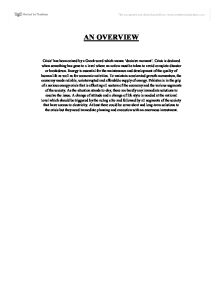 Pakistan is in the grip of a serious energy crisis that is affecting all sectors of the economy and the various segments of the society. As the situation stands to-day, there are hardly any immediate solutions to resolve the issue.

AN OVERVIEW Crisis' has been coined by a Greek word which means 'decisive moment'. Crisis is declared when something has gone to a level where an action must be taken to avoid complete disaster or breakdown. Energy is essential for the maintenance and development of the quality of human life as well as for economic activities. To maintain accelerated growth momentum, the economy needs reliable, uninterrupted and affordable supply of energy. Pakistan is in the grip of a serious energy crisis that is affecting all sectors of the economy and the various segments of the society. As the situation stands to-day, there are hardly any immediate solutions to resolve the issue. A change of attitude and a change of life style is needed at the national level which should be triggered by the ruling elite and followed by all segments of the society that have access to electricity. At best there could be some short and long-term solutions to the crisis but they need immediate planning and execution with an enormous investment. SOURCES OF ENERGY : Pakistan's commercially exploitable energy resources consist of coal, gas, oil and hydropower, and a large base of traditional fuels in the form of fuel wood, agricultural and animal wastes. Pakistan does not have adequate energy reserves . Pakistan has to import large quantities of oil to meet its energy requirements There has been consistent change in the Pakistan since 1997-97. To 2007-07The major energy change has taken place in the share of oil and gas consumption. Let's have a look of each source, their demand, production and consumption. Petroleum Products During the first nine months of the outgoing fiscal year 2007-08, the consumption of petroleum products increased by 10.1 percent. The balance recoverable reserves of crude oil in the country as on January 1st 2008 have been estimated at 339 million barrels. The average crude oil production during July- March 2007-08 was 70,166 barrels per day as against 66,485 barrels per day during the corresponding period of last year, showing an increase of 5.54 percentLet's have a look on consumption and production of crude oil in Pakistan. ...read more.

Over 250,000 workers linked to cottage industries and small businesses are badly affected. Printing presses, garments manufacturers and power looms operators are the main victims of load shedding, he said, adding that power looms have gone down from 30,000 to merely 9,000 while printing presses are down to 7,000. Over 2,500 small garments traders have been partially closed while the remaining have lost local and international orders since they were not able to fill these orders on time, thanks mainly to load shedding. * . According to The News, almost 25 percent of small traders in Karachi have shut down their businesses. This has also increased unemployment. The losses small traders face for every hour of load shedding amount to Rs.1.13 billion. The small and medium sized industries that do not have their own power generating plants were forced to reduce their working staff. * over 100% increase in raw iron prices in the last 3 months, coupled with unprecedented power load shedding, has crippled Pakistan's local industry and brought production down to barely 30% * HYDERABAD: Pakistan Wapda Hydro Electric Central Labour Union (CBA) President: Closure of 3,000 industrial units because of acute power and gas shortage has rendered jobless tens of thousands of workers. * There are lots of small printing shops where people work on small machines.according to them the machine takes at least 10-20 minutes to warm up before starting printing and the electricity breakdown happens 12-14 hours a day. * A 2-hour load-shedding in industrial area means a loss of million of rupees to the national exchequer and denial of man-hour utilization in industries. * According to The Pakistan Association of Automotive Parts & Accessories Manufacturers (PAAPAM) has expressed deep concern over unscheduled load-shedding of electricity which is causing heavy losses to the auto industry. load-shedding of electricity is making it almost impossible for auto parts' manufacturing units to meet local and export orders. ...read more.

However, a top level WAPDA official maintained that electricity demand surged up to 13 per cent during last quarter * The country may plunge into energy crisis by the year 2007 due to rising electricity demand which enters into double digit figure following increasing sale of electrical and electronic appliances on lease finance, it is reliably learnt Thursday. due to a host of factors such as inadequate institutional framework, financial constraints, sky- rocketing oil prices, high risks, low interest of private sector, heavy costs and complex character of hydrocarbon development. To address the issue of demand-supply gap, the government is working on many fronts, including the import of electricity and gas from Iran, utilization of 185 billion reserves of coal, development of small hydro projects, promotion of efficient use of energy, and acceleration of current programmes of alternative energy development. "The country may face energy crisis by the year 2007 following healthy growth of 13 per cent in electricity demand during the last quarter, which will erode surplus production in absence of commissioning of any new power generation project during this financial year, * Usage of electicity: * * , the gap between firm supply and peak hours demand has already been shrunk to three digit (440 MW) during this fiscal and will slip into negative columns next year (-441 MW) and further intensify to (-1,457 MW) during the financial year 2006-07. The report maintained that the difference between firm supply and peak demand is estimated at 5,529 MW by the year 2009-10 when firm electricity supply will stand at 15,055 MW against peak demand of 20,584 MW. Conclusion: The energy demand is expected to increase by 7% annually. The government estimates that by 2010, Pakistan will have to increase its generating capacity by more than 50 percent to meet demand. However, no projects are currently in the works for new energy generation. In comparison to the rest of the world, Pakistan has meager energy needs. Pakistan's per capita consumption is a fifth of the global average, yet the country has failed to meet its needs. ...read more.