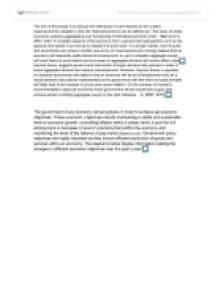 The aim of this essay is to discuss the relevance of John Keynes to the current macroeconomic situation in the UK.

The aim of this essay is to discuss the relevance of John Keynes to the current macroeconomic situation in the UK. Macroeconomics can be defined as "the study of whole economic systems aggregating over functioning of individual economic units" (Bannock G, 2003: 236). It considers aspects of the economy from a government perspective such as the general price levels in an economy instead of a price level in a single market. John Keynes and economists who share a similar view to his on macroeconomics strongly believe that an economy will frequently settle below full employment. In such a situation aggregate supply will most likely be price elastic and increases in aggregate demand will mainly affect output. Keynes theory suggests government intervention through demand side policies in order to boost aggregate demand and reduce unemployment. However, Keynes theory is opposed by classical economists who believe that an economy will be at full employment and as a result demand side policies implemented by the government with the intent to boost demand will likely lead to an increase in prices and cause inflation. On the contrary to Keynes's recommendation classical economist insist government should implement supply side policies aimed at shifting aggregate supply to the right (Gillespie. A, 2007: 307). The government of any economy will set policies in order to achieve set economic objectives. ...read more.

doing so the government will deduct money from the circular flow of income and as result decrease aggregate demand as people have less disposable income. On the other hand, if the economy was within phase4 thus experiencing a recession, low output and increase in unemployment rate, Keynes will likely suggest and an increase in government expenditure or decrease in taxes. Increasing government expenditure and decreasing taxes should stimulate investment within the economy and this will lead to increase business activity resulting increase in output within the economy and decrease in unemployment rate. Keynes believed "a more stable economy will provide a better climate for investment and the growth of both individual businesses and the economy as a whole" ( Sloman J, 2001:297). Keynes strongly backed government intervention in the economy in order to maintain stability. Over the past two years the UK government have severely exercised their authority within the economy as a response to the recent economic downturn through the implementation of a combination of fiscal and monetary policies. Fiscal policy is defined as "policy to affect aggregate demand by altering the balance between government expenditure and taxation" (Sloman J, 2001:297). In response to the credit crisis the UK government implemented a range of fiscal policies such as the temporary decreases of 2.5% in Value added tax this cut VAT to 15% from its previous 17.5%. ...read more.

If government increase the amount of money in circulation demand increase and so will higher prices. In addition, Keynes theories are criticised for promoting the situation known as 'crowding out'. Crowding out is defined as "the offset in aggregate demand that results when expansionary fiscal policy raises the interest rate thereby reduces investment spending"( Mankiw N G, 2001: 748). If government are to inject money into the economy they will need to borrow adding to the country deficit. If government borrowing has a large effect on interest rate, spending and investment in the private sector falls as cost of borrowing spikes. Finally, Keynes states government intervention in the economy is the most efficient way to mange it but this statement brings to light concerns relating to public choice theory. If the government influence on the economy grows there is a chance the decision made by the government will not be in the interest of the public or the economy but to protect their authority and power. Government could make decision like cutting taxes to win votes rather than help the economy. In my opinion Keynes has always been relevant but in light of the recession he has become more relevant but it can be argued that Keynes theories are not the ultimate solution due to the problems they create and as a result the UK government should continue to consider a combination of Keynesian and monetarist ideas to tackle economic problems. ?? ?? ?? ?? ...read more.

Excellent piece of work. Well researched and argued. You could argue that Keynes is less relevant in the present economic crisis because this is not a normal economic crisis. Normally a recession is caused by inflation. This one was not