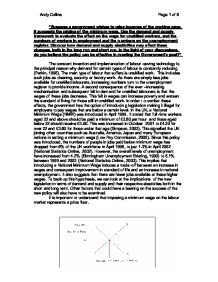 Suppose a government wishes to raise incomes of the working poor. It suggests the raising of the minimum wage.

"Suppose a government wishes to raise incomes of the working poor. It suggests the raising of the minimum wage. Use the demand and supply framework to evaluate the effect on the wage for unskilled workers, and the numbers of workers in employment and the numbers on the unemployment register. Discuss how demand and supply elasticities may effect these changes, both in the long run and short run. In the light of your discussions, do you believe the policy can be effective in meeting the Government's goal?" The constant invention and implementation of labour-saving technology is the principal reason why demand for certain types of labour is constantly reducing (Parkin, 1995). The main type of labour that suffers is unskilled work. This includes such jobs as cleaning, security or factory work. As there are simply less jobs available for unskilled labourers, increasing numbers turn to the unemployment register to provide income. A second consequence of the ever-increasing mechanisation and subsequent fall in demand for unskilled labourers is that the wages of these jobs decrease. This fall in wages can increase poverty and worsen the standard of living for those still in unskilled work. ...read more.

Demand is fairly inelastic. This is because the jobs available will involve necessary tasks and there will be no other alternative to labour available at this time (Bized.ac.uk, 2003). The supply curve however is fairly elastic. This is due to the fact that the jobs are unskilled and consequently there is a large pool of labour competing for each job. It is also true that a small increase in wage will tempt many of the unemployed back into work. We can see that the equilibrium price for unskilled labour before the NMW comes into affect is P* and equilibrium quantity demanded and supplied is Q*. However, once the NMW is introduced (or increased, assuming a previous equilibrium position has been reached) companies will demand less labour as they cannot afford the increased costs. Supply is also greater at this new level, as more unskilled labourers are willing to work for a higher wage. Unemployment created is simply the difference between the new quantity of labour supplied and the new quantity demanded. So what will happen to all of the unskilled labourers who are made redundant as a result of the minimum wage? ...read more.

Using a minimum wage is only part of the government's arsenal to fight poverty. New pay standards will have to be accompanied by other working incentives such as tax breaks for the lowest earners, evident in the USA; or the Working Families Tax Credit (WFTC) introduced recently in the UK (Tran, M, 2000). In answer to the question, I believe that this policy can be effective in raising incomes of the working poor, but only as part of a larger strategy. I would recommend accompanying minimum wages with other incentives to work such as tax credits and family benefits for working parents. They could also limit the amount of time that someone can claim unemployment benefit in order to force them back into work. In order to decrease the inevitable unemployment which will arise after the new wage standards are set, the government should introduce new training schemes to help people get back into work with new skills so that poverty can be avoided. The new level at which the minimum wage is set will have to be calculated very carefully so that it limits the creation of unemployment by not being too high for companies to pay. ...read more.