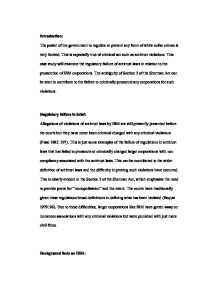 Introduction: The power of the government to regulate or prevent any form of white collar crimes is very limited. This is especially true of criminal act such as antitrust violations. This case study will examine the regulatory failure of antitrust laws in relation to the prosecution of IBM corporations. The ambiguity of Section 2 of the Sherman Act can be seen to contribute to the failure to criminally prosecute any corporations for such violations. Regulatory failure in brief: Allegations of violations of antitrust laws by IBM are still presently presented before the courts but they have never been criminal charged with any criminal violations (Fisse 1983: 197). This is just some examples of the failure of regulations in antitrust laws that has failed to prosecute or criminally charged larger corporations with non compliancy associated with the antitrust laws. This can be contributed to the wider definition of antitrust laws and the difficulty in proving such violations have occurred. This is clearly evident in the Section 2 of the Sherman Act, which emphasize the need to provide prove for "monopolization" and the intent. The courts have traditionally given these regulations broad definitions in defining what has been violated (Bequai 1979: 96). ...read more.

The U.S. antitrust law implies that "monopolization" under Section 2 of Sherman Act is illegal if offender took anti-competitive actions to acquire, preserve or enhance its monopoly. For "monopolization" plaintiff have to prove that the defendant 1. Processed market power 2. Wilfully acquired or maintained this monopoly power as distinguished from acquisition through superior product, business acumen, or historical accident (Bequai 1979: 97). This also raises problems in determining what amount constituted requisite monopolistic power. It is believe that company that has control over 90 percent of the market can be said to have monopolistic power over the sector's economy. In some cases U.S. Supreme Court held that 60 percent control is sufficient, while other courts believe that 75 percent is enough (Bequai 1979: 97). Much of this determination depends on the facts of the case, the market itself, and the product involved (Bequai 1979: 97). For "monopolization" to be illegal under U.S. antitrust law, it is not sufficient enough for a company to "monopolize" a market by possessing large portion of the shares (enough if is 100 percent).Violations of Section 2 of the Sherman Act requires evidences showing that the means employed, if successful would have been sufficient to bring about monopoly control. ...read more.

Another factor which contributed to the failure of prosecuting violators is the decision to hand over jurisdiction of antitrust matters to the Attorney General to purse through the means of the courts and common laws. The courts is knowingly to exhibited several character tics that will contribute to the failure of these regulations. The courts have the ability to discriminate among particular cases, the pluralistic mode of reasoning, and the tendency toward incremental, and the adversary system. These characteristics permit the assertion of the principle of public control while minimizing the violence that control would do to the principle of private decision making in the economic sector (Jamieson 1994: 29-30). Corporations may use political power to ensure favourable antitrust legislation or positive decision by regulatory agencies (Jamieson 1994: 36).Clearly in the case against IBM, the Attorney General lawyer William F. Baxter has the final said in relation to this case. Conclusion: The Section 2 of the Sherman Act failed to stop or prevent larger corporations such as IBM from attempting to monopolize the sector. Even after all the antitrust lawsuits made by private entities and the government against IBM, this has not affected the profit of IBM products as it still remains one of the largest computer corporations today. The failure to criminally prosecute such violations has contributed to this continuing success of IBM. ...read more.