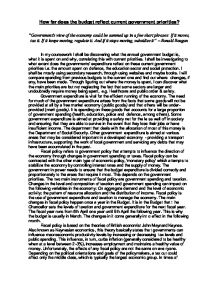 How far does the budget reflect current government priorities? "Government's view of the economy could be summed up in a few short phrases: If it moves, tax it. If it keeps moving, regulate it. And if it stops moving, subsidise it" - Ronald Reagan In my coursework I shall be discovering what the annual government budget is, what it is spent on and why, correlating this with current priorities. I shall be investigating to what extent does the governments' expenditure reflect on these current government priorities i.e. the amount spent on defence, the education sector and social protection. I shall be mostly using secondary research, through using websites and maybe books. I will compare spending from previous budgets to the current one and find out where changes, if any, have been made. Through figuring out where the money is spent, I can discover what the main priorities are but not neglecting the fact that some sectors are larger and undoubtedly require money being spent, e.g. Healthcare and public order & safety. Government expenditure is vital for the efficient running of the economy. The need for much of the government expenditure arises from the facts that some goods will not be provided at all by a free market economy (public goods) and that others will be under-provided (merit goods). It is spending on these goods that accounts for a large proportion of government spending (health, education, police and defence, among others). Some government expenditure is aimed at providing a safety net for the less well off in society and ensuring that they are able to survive in the event that they lose their jobs or have insufficient income. The department that deals with the allocation of most of this money is the Department of Social Security. Other government expenditure is aimed at various areas that may be considered important in a developed economy - providing a transport infrastructure, supporting the work of local government and servicing any debts that may have been accumulated in the past. ...read more.

This could signify that the environment is not classed as such a high priority; although relating to my earlier point of stating that the some areas are larger and therefore require more money suggests that it is not less of a priority. However, it could also be due to the fact that the government believes that protection of the population and the healthcare too are more of a priority than preserving the environment. So it can be looked at in both ways. I myself believe that the government thinks the environment is less of a priority and therefore less money should be invested there. Healthcare in Britain is different to that in most other countries in the way that we have adopted a system called the National Health Service. The NHS is paid for through our taxes and so therefore offers healthcare for everyone in the UK and securing the provision of comprehensive, high quality care for all those who need it, regardless of their ability to pay or where they live or their age. The aims set out by the Department of Health are to: * Supporting activity at national level to protect, promote and improve the nation's health; * Securing responsive social care and child protection for those who lack the support they need. The key objectives for pursuing these aims are to: * To reduce the incidence of avoidable illness, disease and injury in the population. * To treat people with illness, disease or injury quickly, effectively and on the basis of need alone. * To enable people, who are unable to perform essential activities of daily living, including those with chronic illness, disability or terminal illness, to live as full and normal lives as possible. * To maximise the social development of children within stable family settings. These aims and objectives are generic to most years of the NHS but as research and new technologies develop the spending must increase to match demands of the population. ...read more.

Sometimes spending money on one area will directly affect another positively anyway such as improving education will also improve employment and training. As a general rule the government's role is to keep inflation low, keep unemployment low, balance in international trade and maintain a flourishing and prospering economy. The government has been investing large amounts of money into training schemes and other projects that have ultimately led to the unemployment rate falling to 5.2% in February 2008. The claimant count was 793,500 in February 2008, down 2,800 over the previous month and down 126,500 over the year. This is the lowest figure since June 1975. The claimant count has now fallen for 17 consecutive months. This shows that the investments into training and education has led to the fall in unemployment which proves my theory that spending in other sectors subsequently helps others. One could just quite plainly say that the government spending does not reflect current government priorities or otherwise if it did then there would be a perfect economy because the money spent would be used to it's full potential in exactly the right places, doing exactly the right thing; lowering unemployment, improving healthcare, lowering inflation etc. I believe that the difference in the previous budget and the current one describes the extent to which the budget reflects current government priorities better than the looking at the budget itself as the current priorities will determine how much spending will increase in each sector and those with the larger increases (after taking into account inflation) show that they are more of a priority than those with little or no increase. Generally, the government invests the money into areas which is sees to be crucial for the future, so dependent on the priorities, the budget is spent taking into account these and areas of needed development; so if it isn't spent directly reflecting government priorities, it has taken these into account and spent it most wisely considering areas that need improvement but are not always priorities. ...read more.