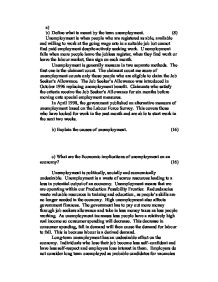 Unemployment and its implications

a) b) Define what is meant by the term unemployment. (8) Unemployment is when people who are registered as able, available and willing to work at the going wage rate in a suitable job but cannot find paid employment despite actively seeking work. Unemployment falls when more people leave the jobless register, when they find work or leave the labour market, than sign on each month. Unemployment is generally measure in two separate methods. The first one is the claimant count. The claimant count measure of unemployment counts only those people who are eligible to claim the Job Seeker's Allowance. ...read more.

b) Explain the causes of unemployment. (16) c) What are the Economic implications of unemployment on an economy? (16) Unemployment is politically, socially and economically undesirable. Unemployment is a waste of scarce resources leading to a loss in potential output of an economy. Unemployment means that we are operating within our Production Possibility Frontier. Redundancies waste valuable resources in training and education, as people's skills are no longer needed in the economy. High unemployment also affects government finances. The government has to pay out more money through job seekers allowance and take in less money taxes as less people working. ...read more.

It is therefore possible for an area to have a large number of job vacancies co-existing with high levels of unemployment, if many of unemployed have been out of work for a long time. Rising unemployment is linked to economic and social deprivation there is some relationship with crime and social dislocation e.g. increased divorce rates, worsening health coupled with lower life expectancy. Areas of high unemployment see falling real income values and the worsening in inequalities of income and wealth. The Production Possibility Curve (PPC) shown below is a diagrammatical representation pf an economy. Points A and B are on the curve which shows that all resources available are being used. Point C is used to represent unemployment as not all the resources are being used. ...read more.