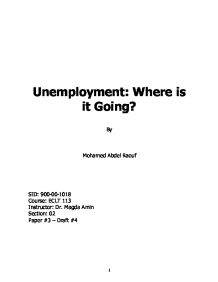 Unemployment: Where is it Going?

Unemployment: Where is it Going? By Mohamed Abdel Raouf SID: 900-00-1018 Course: ECLT 113 Instructor: Dr. Magda Amin Section: 02 Paper #3 - Draft #4 Unemployment: Where is it Going? Unemployment, due to overpopulation and increasing privatization, is causing economic and social instability in Egypt. I. Unemployment is caused by many problems in Egypt. a. Privatization may be considered a major cause of unemployment. b. The rapid increase in Egypt's population is another cause. II. Overpopulation increases the percentage of the unemployed workforce: Egypt has high birth rates which is equal to 2%. III. Another danger is privatization a. Private sector was considered a risk in our grandparents' age. b. Economic changes have led to private sector jobs becoming more promising and more appealing. c. The privatization program aims to strengthen the Egyptian economy, although it is a main cause of the rise of the unemployment rates. d. The private sector jobs don't supply sufficient jobs to the Egyptian labour market, as the government was supplying more jobs. IV. The government is trying to find a solution. a. Birth control program, which appeared to be a failure. b. Making new laws to protect the workers in the private sector, as not to be dismissed. c. The privatization program must be slowed down in order to decrease the rapid increase rate of the unemployed workforce. V. The solution may be found in the new projects. a. Toshka may offer a great number of jobs that will decrease the number of unemployed force. ...read more.

This variation is due to the economic changes in Egypt after the revolution and the open door policy that Sadat had introduced. The reform program that the government has established aims to improve the economic status of Egypt by selling the public sector companies to investors. Although the privatization program that the government has started aims to strengthen Egypt's economy and standard of living of the working employee, it is blamed for the labour unrest problems in Egypt. Mona El-Fiqi, the writer for Al-Ahram Weekly newspaper summarizes the problem in her quotation: "Privatization clearly had a positive impact on the Egyptian economy. But it also had a negative impact on society, contributing to increase rates of poverty and unemployment" (El Fiqi 1). She accuses the privatization program of being responsible for the highly increased rates of unemployment in Egypt, and this opinion is true because the privatization program must be slowed down to avoid laying off more workers that will contribute in the increase of the unemployment rates in Egypt. This fact is supported by the finding of the International Labour Organization assessed that Egypt was running at 8.5 percent of unemployment ten years ago, however it is currently running at 17 percent (qtd. in El Fiqi 2). The high increase in unemployment is surely related to privatization as the public sector was the main supplier of jobs in the past few years. Hamdi Abdel Azim, professor of economics and dean of the research centre at the Sadat Academy for Administrative Sciences points out that: "Due to privatization, nearly 20,000 workers have been ousted from their public sector jobs" (El Fiqi 1). ...read more.

The success of this program will definitely affect the unemployment rates positively, as it is a way to diminish the increase of the population. What is the solution to the unemployment problems? The solution to these problems can't be only one program or a policy; it should be a mixture of programs that either prepares people to fill job vacancies or offers them temporarily work placements (Philpott 218). The government is doing its best to decrease the unemployment rate. Dr. Atef Ebeid says that the government attaches great importance to the issue of unemployment and the creation of job opportunities and has actually completed an overall plan that will provide 150,000 new public and private jobs (Egypt's Plan of Action Centers on Unemployment, Development). The opinion of Dr. Atef Ebied is correct to some extent, but those proposed solution can't solve the problem completely, thus, slowing down the privatization program, would be a suitable solution at this stage. The main key for solving the problem is developing great projects as Toshka and the reclamation of the desert in Sinai. These projects will aid to solve the problem of unemployment as they may offer many job opportunities for unemployed workers. Naguib Mahfouz declared that "when the Toshka project is complete; it will pave the way for the creation of a new Egypt. It will solve many of the problems plaguing us: the shortage of arable land, the lack of housing and unemployment" (Mahfouz 1). We all hope that in the Future problems, such as unemployment, would be solved to live a more desirable life. ...read more.