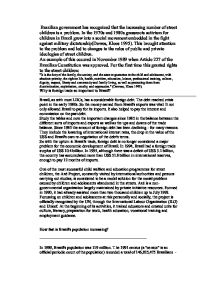 Why is foreign trade so important to Brazil?

Brazilian government has recognized that the increasing number of street children is a problem. In the 1970s and 1980s grassroots activism for children in Brazil grew into a social movement embedded in the fight against military dictatorship(Dewes, Klees 1995). This brought attention to the problem and led to changes in the roles of public and private ideologies of street children. An example of this occured in November 1989 when Article 227 of the Brazilian Constitution was approved. For the first time this granted rights to the street children: "It is the duty of the family, the society, and the state to guarantee to the child and adolescent, with absolute priority, the right to life, health, nutrition, education, leisure, professional training, culture, dignity, respect, liberty and community and family living, as well as protecting them from discrimination, exploitation, cruelty, and oppression." ...read more.

So with the upturn in Brazil's trade, foreign debt is no longer considered a major problem for the economic development of Brazil. In 1994, Brazil had a foreign trade surplus of US$ 10.4 billion. In 1995, although there was a deficit of US$ 3.1 billion, the country has accumulated more than US$ 51.8 billion in international reserves, enough to pay 12 months of imports. One of the most successful child welfare and education programmes for street children, the Ax� Project, constantly visited by international authorities and persons carrying out studies, is considered to be a model solution for the social problem caused by children and adolescents abandoned in the streets. Ax� is a non-governmental organization largely maintained by private initiative resources. ...read more.

Brazil 155 8,512,000 UK 57 242,000 Canada 29 9,971,000 Argentina 32 2,767,000 China 1,178 9,571,000 Brazil has a much larger population than most other countries - in fact only China, India, the USA and Indonesia have more. Brazil is the fifth biggest in terms of area - after the Russian Federation, Canada, China and the USA. So it has plenty of space for every person. If you look at the table, you can see that in the United Kingdom, 57 million people live on fewer than one quarter of a million square kilometres. Brazil with not quite three times as many people as the UK, is 35 times larger. In other words, each Brazilian on average has about 12 times as much space as each person living in the UK. The UK is much more crowded than Brazil! ...read more.