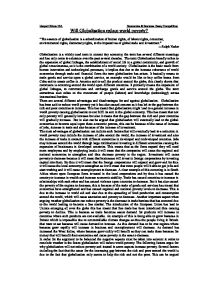 Harpal Chima 13A Economics & Business Essay Competition Will Globalisation reduce world poverty? "The essence of globalisation is a subordination of human rights, of labour rights, consumer, environmental rights, democracy rights, to the imperatives of global trade and investment." ---Ralph Nader Globalisation is a widely used term in current day economy; the term has several different meanings and has only come to existence over the past several decades. The term Globalisation broadly refers to the expansion of global linkages, the establishment of social life in a global community, and growth of global consciousness, so it is the combination of a world society. Globalisation is the basic result from human innovation and technological processes, it implies that due to the increase coherence of world economies through trade and financial flows the term globalisation has arisen. It basically means to trade goods and service upon a global service, an example would be like to buy coffee beans from Cuba and to create coffee in America and to sell the product around the globe, this clearly shows that commerce is occurring around the world upon different countries. It primarily means the expansion of global linkages, to communicate and exchange goods and service around the globe. The term sometimes also refers to the movement of people (labour) and knowledge (technology) across international borders. There are several different advantages and disadvantages for and against globalisation. Globalisation has been said to reduce world poverty yet it has also caused concern as it has led to the gap between the rich and poor countries to increase. ...read more.

In order for the argument to be balanced the negative aspects must be taken into account in order to conclude weather in the future globalisation will reduce world poverty. The following factors argue for why globalisation will not reduce poverty and instead in some aspects increase poverty. Several factors including the fact that the cause for the increasing gap between the rich and poor around the world is due to the fact that globalisation only seems to help the rich and not the poor. This can be argued because globalisation only means that a large percentage of foreign firms will invest in developing countries with large amounts of poverty. This will mean although locals will be employed to do jobs in the region it will mean that most of the profits will benefit the firm who will send most of its retained profit back to its developed country. Thus the developed country that is rich will benefit more rather than the developing country causing poverty levels to be unchanged. Thus the gap between rich and poor countries increase thus causing poverty in part to increase due to globalisation. Globalisation causes child labour to occur in countries such as India and Nepal and products are produced children and get less than 1% of the final profit when the product is sold in economically developed countries. Thus as globalisation causes child labour to increase it will mean they will receive no education and low pay and eventually cause poverty to increase. ...read more.