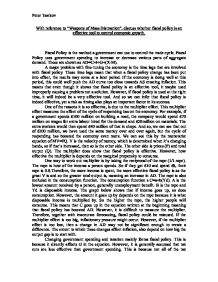 With reference to &quot;Weapons of Mass Distraction&quot;, discuss whether fiscal policy is an effective tool to control economic growth.

With reference to "Weapons of Mass Distraction", discuss whether fiscal policy is an effective tool to control economic growth. Fiscal Policy is the method a government can use to control the trade cycle. Fiscal Policy uses government spending to increase or decrease various parts of aggregate demand. These are shown as AD=C+I+G+(X-M). A major problem with fine-tuning the economy is the time lags that are involved with fiscal policy. These time lags mean that when a fiscal policy change has been put into effect, the results may come at a later period. If the economy is doing well at this period, this could well push the AD curve too close towards AS creating inflation. This means that even though it shows that fiscal policy is an effective tool, it maybe used improperly causing a problem not a solution. However, if fiscal policy is used at the right time, it will indeed be a very effective tool. And so we can infer that fiscal policy is indeed effective, yet a risk as timing also plays an important factor in its success. One of the reasons it is so effective, is due to the multiplier effect. This multiplier effect measures the effect of the cycle of respending has on the economy. ...read more.

However, if the multiplier effect is too low, then a change in AD may not be significant enough to create a difference. The extent to which these changes affect inflation, also depend on how big the output gap is to start with. Changing government spending and taxation mainly forms fiscal policy. This is because it directly affects G in the equation. However, it is generally assumed that tax cuts are less effective than government spending. This is because not all of the tax revenue received by the government. This means the mpc will be low and so reducing the effects of mpc. Also, it is difficult to measure how firms and people would react to tax cuts. Some might be ignorant of the tax cuts and carry on as normal making few adjustments. Yet some might create long-term strategies to work around the tax cut. And so how much effect the tax cut has on the economy depends on the forecast of whether the tax cut is temporary or permanent. If it's permanent, it is most likely going to have huge change, whereas a temporary one wouldn't. The extent to which the effect of the tax has would also depend on which type of tax and whether it's direct or indirect. ...read more.

The extent to which the effectiveness of fiscal policy depends on is the responsiveness of the public to these changes in fiscal policy. In an economy like Japan, fiscal policy is useless as expectations are too low for it to have an effect and increase consumer spending. Therefore expectations play an important part in how effective fiscal policy is. In conclusion, all of these factors affect the economy. However, some affect the economy more than others such as taxation is less effective than spending. Also, the effect of fiscal policy would also change depending whether the economy was in a boom or a recession. We can see this because fiscal policy would have more effect in a boom due to greater expectations and more confidence. And so overall we can see by weighing up the arguments, that fiscal policy is a powerful tool, yet it must be used in the right way. The effectiveness comes from the interaction of these two variables. If they are used to complement each other, then fiscal policy is indeed very handy. However if the opposite is true, then it can b a devastating blow to the economy in the form of deflation or inflation or loss of confidence. An important factor is also monetary policy. If monetary policy is loose, then fiscal must be very tight in order to increase the capacity of the economy substantially. Peter Tsarkov ...read more.