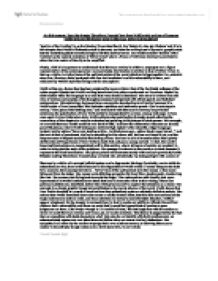 7In this passage, from the chapter 'Styrofoam Peanuts'how does Wolfe's style and use of language vividly bring to life this key point in Sherman McCoy's degradation?

7In this passage, from the chapter 'Styrofoam Peanuts' how does Wolfe's style and use of language vividly bring to life this key point in Sherman McCoy's degradation? 'Bonfire of the Vanities' is, as the Sunday Times describes it, the 'debut of a day-glo Dickens' and it is in this chapter that Wolfe's Dickensian style is clearest; not does the writing have a dynamic, graphic style but the underlying black comedy brings to life this satirical scene. One could consider 'Bonfire of the Vanities' as the natural evolution of 'Oliver Twist' where a frame of reference (McCoy) is provided to allow the true nature of the city to be amplified. Firstly, I feel it is important to understand that Sherman McCoy is neither a scapegoat nor a figure representative of his contemporaries: more precisely, his function is similar to that of Oliver Twist, in that as a victim, he is the focus of the satirical points of the novel which he brings together in a cohesive story line. ...read more.

For example, we are told Sherman 'could smell his own funk of filth,' and here the alliteration enhances an already powerful phrase, where Wolfe juxtaposes McCoy's high register with colourful, vulgar language. Indeed, McCoy claims 'They were looking at him...in this human pen...yellow lunch meat, bread..." and the tone is that of numbness. McCoy is searching for his reborn self, but has not found it yet, and the frequent uses of ellipses symbolize this feeling of loss. The tone is one of sensationalism that quietly derides the self-importance of New Yorkers; both rich and poor, young and old. In fact, the novel's broad satirical points are encapsulated well in this section, where all layers of society are mocked, in order to bring out the scale of the problems. The passage is relevant to the novel as a whole because it represents the final humiliation. The grimy prison cell contrasts starkly with McCoy's previously lavish lifestyle making 'Styrofoam Peanuts' play a crucial role, structurally- by juxtaposing it with ...read more.

The actions that Wolfe described above also create a mildly farcical effect, but this does not undermine the tragic undertones: both co-exist, and draw attention to McCoy's uncomfortable situation. Neither appear misplaced, for the chapter is metasatirical, in that it mocks our ability to ridicule his satirical victims: their vulnerability and flaws are such that it would be hypocritical of readers to pass judgement on them. Like Evelyn Waugh in 'A Handful of Dust,' the last laugh lies with the author as when we mock Sherman McCoy and Tony Last, we mock ourselves. This theory is supported by the fact that we empathise with both characters; why? Not only do we identify with their predicament, we subconsciously excuse our own blemishes and follies when we excuse McCoy's behaviour. The sympathy is an effort by the readers to purge their own misdemeanours, so allowing Sherman to wallow in his self-pity simply raises us to a level above him, in our minds. Word Count: 836 SHASHANK JOSHI ...read more.