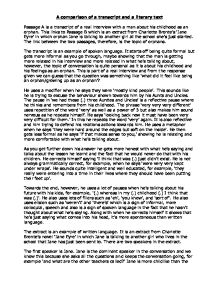 A comparison of a transcript and a literary text

A comparison of a transcript and a literary text Passage A is a transcript of a real interview with a man about his childhood as an orphan. This links to Passage B which is an extract from Charlotte Bronte's 'Jane Eyre' in which orphan Jane is talking to another girl at the school she's just started. The link between the two passages, therefore, is the topic of orphans. The transcript is an example of spoken language. It starts off being quite formal but gets more informal as you go through, maybe showing that the man is getting more relaxed in his interview and more relaxed in what he's talking about, however, the topic of conversation is quite personal as it is about his childhood and his feelings as an orphan. This is part of a real interview and from the response given we can guess that the question was something like 'what did it feel like being an orphan/growing up as an orphan'? ...read more.

childhood (.) I think that was (.)'. He also uses lots of fillers such as 'eh', 'you know', and 'sort of'. He also uses elision such as 'weren't' and 'there's' which is a sign of informal, more colloquial, speech and also is a sign of spoken language in the fact that he hasn't thought about what he's saying. Along with when he corrects himself it shows that he's just saying what comes into his head, it's more spontaneous than written language. The extract is an example of written language. It is an extract from Charlotte Bronte's novel 'Jane Eyre' in which Jane is talking to another girl who lives in the school that Jane has just been sent to. There are two speakers in the extract. The first speaker is Jane. Jane is the dominant speaker in the conversation and we know this because she asks all the questions and keeps the conversation going, for example 'and what are the other teachers called?' Jane is more childlike than the second speaker and sounds more na�ve with all the questions she asks such as 'Then why do they call us charity-children?' ...read more.

This as quite a tired tone and suggests that she is not entirely happy there but doesn't want to tell Jane that. This extract is much more structured than the transcript. The sentences in the extract are much longer with one complex sentence lasting 6 lines. The use of language is different for both speakers and the use of different tones and sentence length makes each of the speakers sound very different. However, both the transcript and the extract are similar in the respect that the use of pauses and tones in both pieces give a good idea of the feeling of the people talking. In the transcript the use of the pause in the sentence 'we had these (.) three aunties and uncles' gives a sense of reflection and suggests that he is thinking about his past and is a very reflective tone. In the extract, sentences such as 'What is Lowood Institution?' suggests Jane's naivety and youth whereas sentences such as 'Because fifteen pounds is not enough for board and teaching, and the deficiency is supplied by subscription', suggests the other girls knowledge of her surroundings and the use of language suggests she is well educated. ...read more.