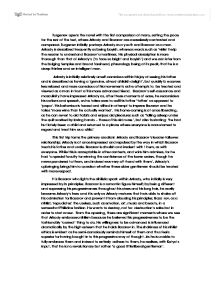 A comparison of Arkady and Bazarov, from Turgenevs Fathers and Sons

Turgenev opens the novel with the first comparison of many, setting the pace for the rest of the text, where Arkady and Bazarov are ceaselessly contrasted and compared. Turgenev initially portrays Arkady as a youth and Bazarov as a man. Arkady is described frequently as being boyish, whereas words such as 'virile' help the reader to understand Bazarov's manliness. His physical description is more thorough than that of Arkady's ('a face so bright and boyish') and we can infer from the bulging temples and broad forehead, phrenology being at its peak, that he is a deep thinker and an intelligent man. Arkady is initially relatively unself-conscious within his joy at seeing his father and is described as having a 'genuine, almost childish delight', but quickly becomes less relaxed and more conscious of his movements as he attempts to be treated and viewed as a man in front of his more advanced friend. Bazarov's self-assurance and masculinity have impressed Arkady as, after these moments of ease, he reconsiders his actions and speech, as he takes care to call his father 'father' as opposed to 'papa'. His behaviour is forced and stilted in attempt to impress Bazarov and he takes 'more wine than he actually wanted'. ...read more.

Bazarov, on the other hand, sticks steadfastly to his moral high-ground. It is Bazarov's self-assurance and subsequent insolence that helps to break down their leader-follower relationship, as Bazarov's attitude toward Nikolai and Pavel sows doubtful seeds in Arkady's mind and he first questions Bazarov's doctrine. As Arkady matures throughout the text, he begins to find Bazarov's cynical and somewhat blinkered ways tiring: we see this first shortly before the two leave Arkady's father's house, when Arkady asks Bazarov, 'And is nature trivial?' This is the turning point in their relationship as it is where the 'fledging' first thinks of flying solo. Arkady's personality is somewhat different to Bazarov's intensity. Arkady is in some ways more mature than Bazarov, specifically in the way that he is generally mellower and less angry at the world in general. We see this contrast most specifically when both fall in love with Anna Odintsov. Arkady accepts his ardour, appreciates how little interest she has in him and settles into a contemplative melancholy. Bazarov, on the other hand, grows angry with his 'weakness' and is disgusted at the way in which he has been so easily taken other by 'mouldy aesthetics'. Arkady shies from conflict where possible and gives respect where he feels respect to be due. ...read more.

He loves Katya not only because she is attractive, but because he views her as a friend with worthy opinions and thoughts. We see Turgenev's opinions of the two characters by the conclusion of the plot. Bazarov, highly ironically, dies at the hands of his highly revered science and realises as he dies that being a revolutionary betrayed all his principles. All the time spent preaching could have been spent in being useful and he realises that the 'tinker' is in fact far more use than the radical. On his deathbed, he also discovers that the most important thing, his love for Anna, is one of the things that he previously keenly dismissed as 'mouldy aesthetics'. Turgenev shows us that the stereotypically angry young man is not so much bad as unknowingly narrow-minded. Bazarov's story is a sad one; Turgenev evidently both pities and despairs of him as a character and it is only through death that he is finally able to mature emotionally and mentally and revaluate his all-important priorities. At the beginning of the text, Turgenev views Arkady as a foolish young boy who holds Bazarov in unnecessarily high esteem. However, as Arkady learns to form his own opinions, Turgenev's tone in regard to him warms and, by Arkady's happy ending, we see the respect that Turgenev has for the character's balance. It is this equilibrium that saved him while Bazarov's extremes drove him to his demise. ?? ?? ?? ?? ...read more.