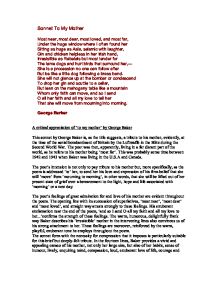 A critical appreciation of 'to my mother' by George Baker.

Sonnet To My Mother Most near, most dear, most loved, and most far, Under the huge window where I often found her Sitting as huge as Asia, seismic with laughter, Gin and chicken helpless in her Irish hand, Irresistible as Rabelais but most tender for The lame dogs and hurt birds that surround her,- She is a procession no one can follow after But be like a little dog following a brass band. She will not glance up at the bomber or condescend To drop her gin and scuttle to a cellar, But lean on the mahogany table like a mountain Whom only faith can move, and so I send O all her faith and all my love to tell her That she will move from mourning into morning. George Barker A critical appreciation of 'to my mother' by George Baker This sonnet by George Baker is, as the title suggests, a tribute to his mother, evidently, at the time of the aerial bombardment of Britain by the Luftwaffe in the Blitz during the Second World War. The poet was then, apparently, living in a far distant part of the world, as he refers to his mother being 'most far'. ...read more.

His basically simple, everyday vocabulary has, however, a great deal of verve, as in the strongly assertive first line consisting mostly of monosyllables: 'Most near, most dear, most loved, most far.' Other ordinary, everyday language helps establish his mother in the reader's mind as a real, flesh-and-blood person: 'Under the window where I often saw her', while the 'Gin and chicken helpless in her hand' conveys the gusto with which she enjoyed food and her favourite tipple, gin. The above line also suggests her huge size as the piece of chicken is 'helpless' or dwarfed by her large hand. In Baker's poem, his mother is not at all an idealized person but a larger-than -life, charismatic character whose shortcomings even, namely her fondness for food and drink, seem like attractions and part of her colourful, expansive personality. In the sestet, Baker pictures his mother leaning 'on the mahogany table life a mountain' again creating a very strong impression of her bulk and solidity. There are, however, a few exceptions to the poet's use of largely everyday language, for example, in the literary allusion he makes to his mother being 'as irresistible as Rabelais'. ...read more.

Nothing except 'faith' can 'move' his mother who stands as firm in her faith and principles as an immovable 'mountain'. Also an a large scale, but with a human frame of reference, is his comparison of his mother o a 'procession' and 'brass band', these images conveying a vivid impression of her expansive size and loud, colourful, charismatic personality whish seems to draw everyone's attention like the colourful spectacle of a 'procession' or the loud, cheery entertainment of a 'brass band'. Indeed, in comparison with his mother, others paled into insignificance resembling a pathetic 'little dog' following ridiculously in the wake of such a public performance. Thus through his imagery, the poet creates a vivid picture of many facets of his mother: her size; exuberant manner; religious faith; and magnetic personality. Baker also makes use of direct comparison to show up his great-hearted mother against lesser mortals who 'scuttle' fearfully to a 'cellar' whilst she will not even 'glance up' at the bomber or 'condescend/ To drop her gin'. This contrast suggests that his mother is almost superhuman in her courage and proper pride. So vivid and life-like is baker's portrait of his mother that I see her in my mind's eyes as a real but larger-than-life personality and I appreciate fully how such a mother would win his love and unqualified admiration. ...read more.

This is a very strong essay with some excellent analysis of language and writer's purpose. There is good support used from the text and a breadth of points are covered. Further exploration of structure is recommended, particularly when looking at a piece of poetry. Always ensure careful planning before writing an essay, including full consideration of a suitable question and how the analysis will relate to the question.